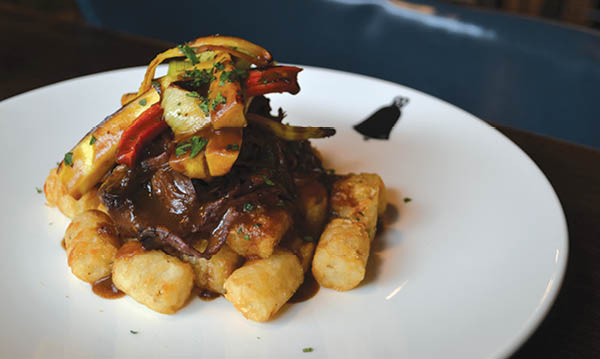 For years, University of Michigan fans gathered before and after games at Ann Arbor’s Pretzel Bell. The hangout closed its doors 31 years ago, but ardent fans kept begging for someone to bring it back. In April, a group of U-M athletes, alumni, and other U-M supporters did just that – with their own twist.

“For years, when you asked people about their best memories about Ann Arbor, very often it had something to do with the Pretzel Bell,” says general manager Brent Stevens, who notes its walls now sport over 140 black-and-white official U-M photos and 200 pieces of memorabilia, from trophies to sports jackets.

The menu is old school with a modern spin. One example, P-Bell Fries, come three ways – with curried peanut sauce and scallions, an herb-lemon sea salt or beer cheese and bacon. For first-timers on weekends, Stevens suggests the prime rib.

P-Bell went all out on the kids menu, too – and Stevens’ tykes approve. Beckett, 3, loves the grilled cheese, while Greyson, 6, is all about the mac ‘n’ cheese, with its tangy cheese and Goldfish crackers on top. “Whenever the server takes it out the kids’ eyes just light up!” dad says. Give P-Bell’s braised rib recipe, from executive chef Neal Diebold, a try at home with your little chefs.

Try its first floor for comfortable seating and plenty of room for your family.

How to Make Emoji Rainbow Brownies