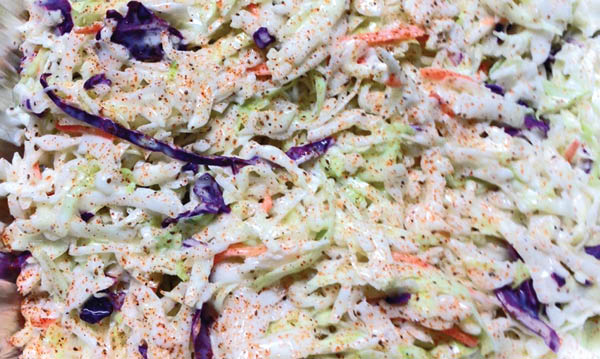 Note: Sadly, the T-Rex Bar-B-Q in Allen Park closed in early September 2015. However, its coleslaw recipe is far from extinct! Check it out below.

Are your kids crazy for dinosaurs? For little Velociraptor fans – and hey, who isn’t after seeing this summer’s blockbuster Jurassic World? – there’s a cool menu waiting at T-Rex Bar-B-Q in Allen Park.

“I thought it would be something different,” says owner Rob Josupeit of his restaurant’s dino theme. The T-Rex, which he opened last December, is a modern mom-and-pop with a simple-yet-growing assortment of dino decor including ride-on Triceratops toys kids can pose on for a photo op, loads of kids’ Tyrannosaurs coloring-page art dotting the hallways and a big in-progress mural.

But the menu, topped with a green ‘Rex chowing a rack of ribs, is where dinos really rule – and Josupeit’s recipes roar.

You can dine on “Bronto Burgers” like The Spinosaurus, topped with mushrooms and Swiss. Or order a “Seismic Sandwich” like the Carnivore – brisket covered in BBQ sauce, cheddar cheese, onion rings and spices.

The favorite around T-Rex, however, is the rib kebabs. Rib meat is threaded onto a skewer and then barbecued. Once they’re cooked through, the kebabs are battered lightly and then fried. “Everyone loves them – kids, adults,” says Josupeit. Be sure to chase it with a popular Faygo float. And, at your next barbecue, round out the menu with this “rextaurant’s” easy coleslaw.

The vibe is casual and the meals are dino-sized! Come hungry for brisket, pulled pork and roast turkey, plus salads, burgers, chili and lots of homemade sides.

How to Make Emoji Rainbow Brownies