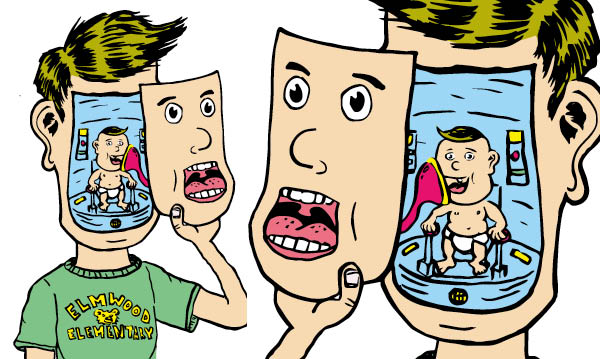 Your child, who’s known how to speak properly for years, has suddenly started “baby talking” again. It was adorable to hear those mispronounced words and phrases when they were first learning to talk, but when older kids speak incorrectly on purpose, it can be a little concerning – if not a shock – to parents. Most of the time, though, it’s just a stage. Here’s what’s going on.

Why they do it

While it varies from child to child, most kids have a pretty solid vocabulary by the age of about 4-5. Baby talking can happen for many reasons when kids are still in their younger years, but most of the time, it’s attention-related.

“Sometimes things like changes within the household, such as a new sibling, can cause kids to regress a little, but it’s pretty normal,” says Nikki Sulaica, a child and adolescent psychologist in West Bloomfield. “Kids also sometimes get positive attention from it, which makes them think it’s funny or cute.”

Most of the time, fake baby talking occurs in kids between the ages of 5-9, she adds. Girls tend to use it more than boys, Sulaica notes, as they want to be seen both by parents and peers as cute or funny – but boys do use it at times, too.

In some cases, a child might have a developmental problem that blocks their ability to learn and retain information, which could cause baby-talking, but this is rare.

How you should react

Kids might say things like, “Me want cookie,” slur their speech or use a different tone. While many parents immediately think to scold their child when they use baby talk, especially in public or after it has been going on for a while, Sulaica says a passive approach is a more appropriate reaction.

“Punishing or lecturing can actually reinforce the behavior,” she says. “Initially, don’t give any extra attention to the baby talk, and then try to figure out where it’s coming from.”

If kids are trying to be playful or funny, Sulaica recommends parents help their child find another way to express that. If there’s a significant change within the household around the same time, though, kids may be having some anxiety and are using the baby talk to feel better or gain the attention of the parents.

Kids, even as they grow into adolescents, still do not know how to accurately communicate their emotions, Sulaica says.

“Rather than coming out with words and saying, ‘I need more hugs,’ it’s more likely to come out of a child as some kind of behavior,” she says.

How to break the habit

While ignoring the talk is one tactic, Sulaica says that positive reinforcement when kids are not baby talking is better at helping make them stop.

“Saying things like, ‘Wow, it’s so much easier to hear you when you speak correctly’ positively reinforces the good behavior,” she says.

Pick this approach over guilting and shaming, she adds. “The reward center of the brain is activated when attention is given, whether the attention is positive or negative. You don’t want to unknowingly reinforce the action.”

If it is a continuous problem that won’t go away, Sulaica recommends counseling to be sure that nothing else is wrong developmentally or emotionally.

But most cases, again, baby talking is a stage that can be dealt with at home with positive reinforcement and understanding that the child is likely seeking attention for a variety of potential reasons.

Keep in mind that kids tend to change their behaviors when they do not know how to communicate effectively – and baby talk is very common.