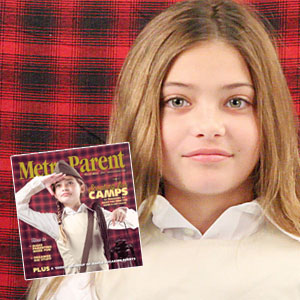 Sometimes, a kid winds up perfectly “cast” for the month she’s representing. And we think CoverKid Brooke, 11, of Birmingham captured the adventurous spirit of Metro Parent’s March 2014 camp issue spot-on. This southeast Michigan tween’s been to a total of three camps throughout the state – including one her mom even attended as a kid! – and has done it all, from horseback riding and crafts to swimming and tennis … even making friends in other states. Since our cover story is all about awesome specialty camps in southeast Michigan and beyond, Brooke’s loquacious tales of summer fun definitely fit the bill.

Why not meet this animated, eloquent gal for yourself? She’s also an ace at some really wacky accents, as you’ll quickly see – and does a pretty entertaining impression of her mom’s yoga antics (her parents are named Barbie and Kenny – “I swear. I’m not joking,” Brooke says). Oh, and don’t fret – off camera, she also told us, “I love my mom. She’s like my BFF. We always do fun things together. We talk and we talk and talk!”

You can meet all of our CoverKids winners for 2013, including those who were announced in September 2013 and will be appearing on our magazine covers into early 2014.

Interested in your kid being on the cover of Metro Parent magazine? Hurry on over to the Metro Parent CoverKids page. We’re currently taking photo submissions for his year’s contest (for contenders for our 2014-15 covers). Natural self-confidence, poise and personality are what it takes – as you can see with Brooke. Better hurry, though: The deadline to enter is 11:59 p.m. on Monday, March 31, 2014. You never know: They might wind up in the spotlight, too!