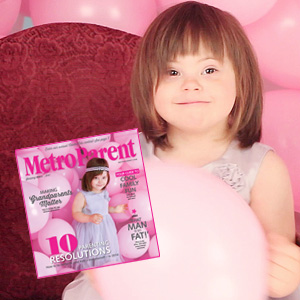 It’s tough not to bust into a wide-open grin when Catherine, 4, of Rochester Hills bursts through a big wall of pink balloons. Whether she’s dancing around while singing “I Like to Move It,” announcing her doll’s name (it’s Dalai Lama!) or just dissolving into giggles, this little girl has energy and smiles to spare. We thought she made the perfect CoverKid for the January 2014 cover of Metro Parent – where we featured 10 realistic (and really fundamental) resolutions for all parents.

Whether she’s in a small-scale top hat or pretty beaded headband, Catherine, a fun and energetic child with Down syndrome, is definitely “ready!” for her close-up. Watch this dynamic girl in action in our video:

You can meet all of our CoverKids winners for 2013, including the readers who were announced in September 2013 and will be appearing on our magazine covers into early 2014.

Interested in your kid being on the cover of Metro Parent magazine? Check out the Metro Parent CoverKids page. As information about our 2014 event emerges (for contenders for our 2014-15 covers), this is where you’ll find it (details coming very soon!). Natural self-confidence, poise and personality are what it takes – as you can see with Catherine. We hope you’ll get your kids involved with the next CoverKids. You never know: They might wind up in the spotlight, too.