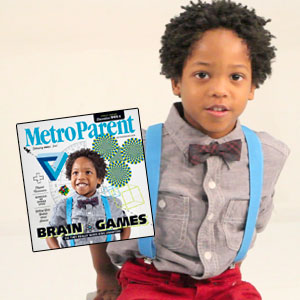 Fix up that bowtie: Our scholarly little CoverKid Drew, 4, of Detroit gets suited up for the cover of Metro Parent’s February 2014 Education issue – a school-focused edition featuring a look at whether brain games can really boost kids’ intelligence, getting girls geeked about science and STEM subjects and more. So we “tested” this cool kid’s smarts with a few questions of our own. You know, the important stuff – like what happened when he tried to cut his own hair, what his parents do for a living (spoiler alert: It’s not washing cars!) and favorite color (which is, perhaps, also his least favorite – how’s that for a brain twister?).

Check out our Q&A video with dynamic Drew, which also features some of his stellar dance moves and quips (one a bit more convincing than the other):

You can meet all of our CoverKids winners for 2013, including those who were announced in September 2013 and will be appearing on our magazine covers into early 2014.

Interested in your kid being on the cover of Metro Parent magazine? Hurry on over to the Metro Parent CoverKids page. We’re currently taking photo submissions for his year’s contest (for contenders for our 2014-15 covers). Natural self-confidence, poise and personality are what it takes – as you can see with Drew. Better hurry, though: The deadline to enter is 11:59 p.m. on Monday, March 31, 2014. You never know: They might wind up in the spotlight, too!

Christmas Eve is one of the most magical nights of the year. The excitement of the holiday is reaching its peak, and children are...
Read more
At Home