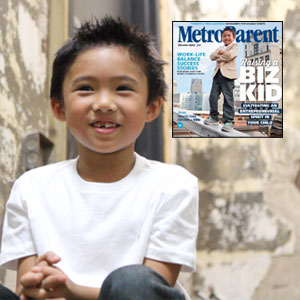 Wow – this kid looks like he means business! That’s exactly what Kai, 7, of Troy was up to as he struck an entrepreneurial pose atop the Detroit Opera House at its new-for-2013 rooftop patio. He captured our feature article with advice on raising a business-savvy kid – the cover story for the November 2013 issue of Metro Parent magazine.

We wanted to get to know a bit more about this Oakland County kid – so we asked him a few questions in our behind-the-scenes video. Turns out he’s quite the sporty guy (lacrosse, soccer, swimming – and don’t forget golf!) who enjoys a good snowball fight. Kai’s also got a pretty good joke in his pocket. Check out his interview here:

Be sure to meet all of our CoverKids winners for 2013, including the readers who were announced in September 2013 and will be appearing on our magazine covers into early 2014.

Interested in your kid being on the cover of Metro Parent magazine? Check out the Metro Parent CoverKids page. As information about our 2014 event emerges (for contenders for our 2014-15 covers), this is where you’ll find it (give us a few months; it’s in the works!). Natural self-confidence, poise and personality are what it takes – as you can see with Kai. We hope you’ll get your kids involved with the next CoverKids. You never know: They might wind up in the spotlight, too.