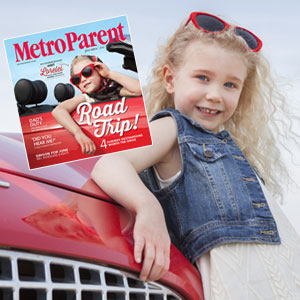 Little Lorelei, 5, of Rochester Hills is going places. And we don’t mean in that snazzy Thunderbird on the cover of our latest magazine (she’s still got a good decade till she’s driving!).

This fun, fearless Rochester Hills 5-year-old is our 2014 CoverKids grand-prize winner and revs up the cover of the June 2014 Metro Parent, plugging our story about four awesome summer road trips for southeast Michigan families. Lorelei was one of 2,680 local kids who entered the contest. And, whether she follows her dreams of owning a horse farm, singing and acting – or chooses another career – she’s also won a $1,529 MESP college savings account to help!

In our eyes, Lorelei was a fantastic fit, with pep and personality to spare. This bouncy blonde kept us on our toes with her expressive voices, silly hide-and-seek faces and quirky jokes. Why did the horsey cross the road? Check out the behind-the-scenes video to find out:

For a second year, Metro Parent teamed up with MESP – that’s the Michigan Education Savings Plan – to invest in our CoverKid’s photo op and future. Think of MESP as a 401(k) – only for your child’s college, vs. your retirement. The money you put in it is tax-free, thanks to its federal “529” status. You can start one up with just $25, and contribute as little as $15 per pay period. There’s no limit to how much you add annually, though the max account balance is $235,000. Your kid can ultimately use the cash for tuition, room and board, and other college costs.