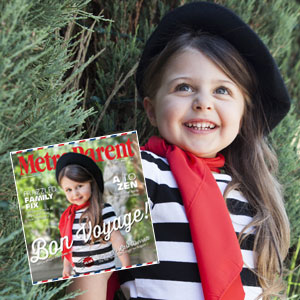 Whether she’s giggling at knock-knock jokes or gushing about her baby brother, Sophie, 4, of Birmingham is really a trip!  That’s why this spunky southeast Michigan preschool tyke was a perfect fit for the cover of our late-summer magazine.

Little Miss Sophie gussied up in a classic French beret and black-and-white-striped top to capture the idea of taking a family vacation abroad with your kids, which was the cover story of the August 2014 Metro Parent. If any kid could weather an eight-and-a-half hour trip across the pond, we think this smiling gal is one great candidate! Get to know her and that adorable grin a bit better in this sweet short video: