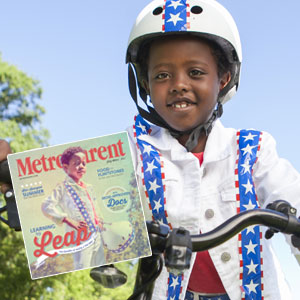 Are there some motorcycling stunts in the future of Taye, 6, of Pleasant Ridge? Only time will tell, but for now, one thing’s for sure: He fearlessly tackled his role as Evel Knievel – the iconic motorcycle-riding daredevil who broke somewhere around 430 bones in is lifetime – for the cover of Metro Parent’s mid-summer issue.

Taye helped capture our story about why it’s important to raise a risk-taking kid, a feature story in the July 2014 Metro Parent. With a blue bike proxy for Evel’s ’70s ‘cycle, and complete with a star-spangled white jumpsuit, Taye chatted a bit with us about Mr. Knievel – and his dream pet (hint: It’s pretty wild!):