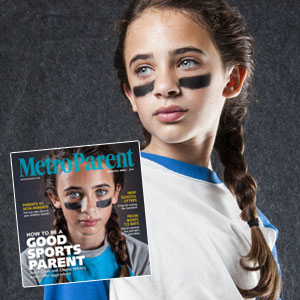 Sporting a pair of braids, intense look and – with the help of a water spritzer bottle – a glistening athletic look, Yasmin, 12, of Farmington Hills made the cover of our back-to-school issue a real winner.

Yasmin, who’s also lived part of her young life England (and has the accent to prove it), set the tone for our story about how local sports moms strike a balance between supporting their kids and keeping a level head, the cover story of the September 2014 Metro Parent.

It was a pretty good match, too, since Yasmin herself is into sports – basketball, swimming, gymnastics and soccer, to name a few! She’s also got a pretty serious crush on two of the lads from One Direction. Want to know which ones – and what went into the creation of this cool cover? Check out our behind-the-scenes video: