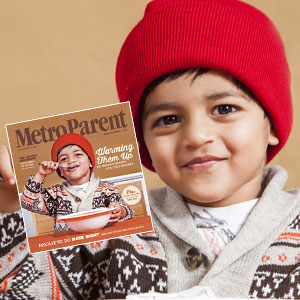 Whether it’s bone chilling or just a bit nippy, winter in Michigan sure can be cold. But luckily, Zevesh, 3, of Ann Arbor helped Metro Parent warm things up with his heart-warming cover shoot!

Bubbling with personality (and those bright brown eyes!), little Zevi (as his mom calls him) wore a cozy cap and snow-ready sweater to happily chow away on some delicious soup – the cover story for the January 2015 issue of Metro Parent. It focused on three delicious soup recipes that are sure to combat the cold weather – coupled with a few yummy extras, from muffins to hot chocolate. And while his final photo wound up cuter than a button, the behind-the-scenes footage is possibly even more precious as this tyke chats about food, dogs, thunderstorms and more: