From nail trimming to bathing, here's what parents need to know and do when it comes to healthy bath time and hygiene routines for infants. 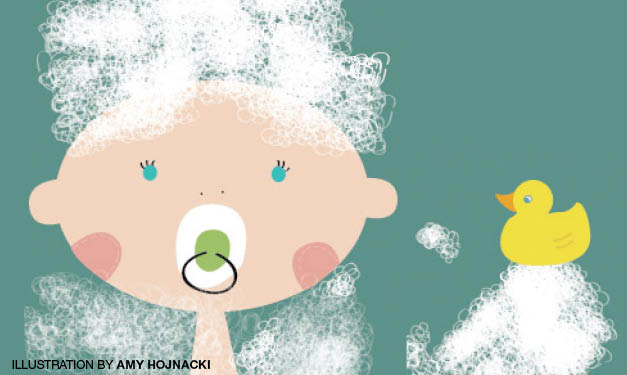 When Lillian was 3 and her baby brother, Joel, was 9 months old, nail trimming time was “not good,” says mom Christy Nader of Wyandotte. “They both hate it with a passion.”

While cutting tiny nails, parents need to be careful not to over-trim. Dr. Dan Frattarelli, a pediatrician at Beaumont in Dearborn, recommends using tiny scissors and to keep a thin white area extending from the nail.

“You’re never going to get those nails short enough so the baby can’t scratch his face,” he says.

Not all grooming habits are necessarily a struggle, though. Bath time is fun for Lillian and Joel, Nader says – especially for Lillian, who loves to play with her bath toys.

Nader and her husband bathe their kids two to three times a week to prevent dry skin, and they particularly focus on the face, hands and diaper area. That’s exactly what parents should be doing, Frattarelli says.

“Just wash the dirty areas,” he says. Parents should concentrate on the mouth and diaper region, and a cleaning around every three days should be sufficient.

Infants don’t require full baths; wiping them down with a washcloth is fine. For babies who haven’t lost their umbilical cord yet, hold off on getting that area wet until a few days after it comes off.

For hair care, Frattarelli recommends using gentle shampoos and reminds parents: “You’re not going to wash off cradle cap.” Trying to scrub it off will only irritate the skin.

For babies who get upset every time bath time comes around, Frattarelli recommends trying to determine the cause of the baby’s anxiety.

“Sometimes, the babies feel vulnerable because they’re slipping around a lot,” he says – in which case, parents need to keep a firmer grasp on the child. Other times, cold air might be a factor; Frattarelli solved this problem for his son by putting a space heater in the bathroom.

Rubbing lotion on the kids after bath time stops tears in their tracks, says Nader. Using a lavender-scented baby product appeals to both parent and child and helps make time in the tub more relaxing.

Staying calm, Frattarelli says, helps the entire process go more smoothly. “Kids are very good at picking up on their parents’ anxiety,” he says. Chill out during bath time, and your child most likely will, too.

Nader and her husband tag-team bath time – one washes the kids while the other gets pajamas and lotion ready to roll. It’s a calming way to end the day without noisy toys or distractions, she says.

Of course, keeping your baby safe during bath time is paramount. And Frattarelli has a few tips to make sure your little one gets clean, accident-free.

When it comes to water temperature, parents need to be careful that they don’t accidentally burn the child. Parents should turn their home’s water heater down to the energy saving level, and always test the water before putting the child in the tub. Frattarelli recommends parents hold a hand under the water for at least five seconds to make sure the temperature is OK.

Make sure the floor is dry, so you don’t slip while carrying the baby. Keep all electronic devices away from the water and never, ever leave the baby unattended. Accidental bathtub drownings accounted for two-thirds of the at-home drowning deaths among children reported to the U.S. Consumer Product Safety Commission between 1996 and 1999.

While bathing a young child, a good way to hold the child is to reach around the back and hold the child under his or her armpits. Frattarelli recommends that parents keep a good grip on two parts of the child while carrying him or her. If a new parent is unsure how to hold a child, his or her pediatrician’s office can show them how.