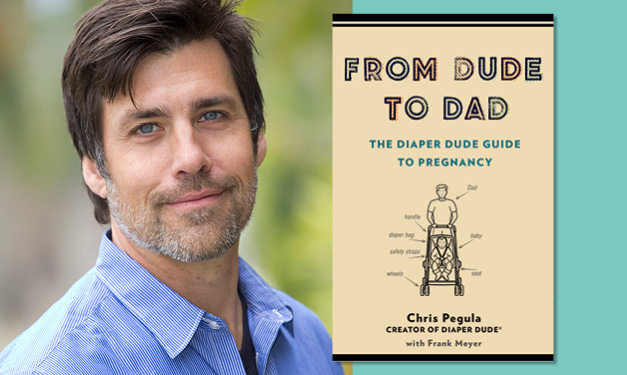 For Chris Pegula, the reality of becoming a new dad hit when his then-pregnant wife brought home a dozen diaper bags.

Appalled at the thought of carrying one of the flowery, feminine bags, Pegula set out to create a trendy, more masculine version to claim his new role as a father and share the excitement with his wife. It was a small symbol that grew into Diaper Dude, a company based on the premise that modern men can be involved in every aspect of their baby's lives – even changing nappies. In his new book, From Dude to Dad: The Diaper Dude Guide to Pregnancy, Pegula takes his commitment to helping new dads even further, letting them know what to expect when their wives are expecting.

Here, Metro Parent talks to the L.A.-based author, entrepreneur and father of three:

What does the Diaper Dude diaper bag symbolize to you?

It's a subconscious and subtle incentive to be more involved. It also gives you an identity – I'm a dad and I'm excited. I belong to this club. It gives you confidence that you can handle what you're about to embark on. You don't have to lose who you are when you become a dad.

What is your message to dads-to-be?

Don't think you can't take charge and be a 50/50 partner just because you don't carry the child. We lucked out as guys. We don't have to go through that but that doesn't mean we can't be just as involved.

I wanted to establish with this book that there are ways to stay connected from the very beginning. We just have to do some work and these tips will get you more comfortable before the baby comes.

So give us a couple of tips.

I feel like the first thing really is being available for as many if not all doctor appointments your partner is going to. Being a part of the whole experience is really key. Your wife needs that support, plus you don't want to miss those moments that are so meaningful — the first heartbeat, the first ultrasound.

From the very beginning, get used to things not being the same. The hormonal and physical changes women have to go through when they're pregnant are so huge. Be available, be encouraging. Offer those words of support and focus on the partnership. Pitch in any way possible doing stuff around the house. If you can establish that role now, when the kids come it will be that much easier.

Do you think dads are intimidated by their new role?

I feel like since women experience the pregnancy they're so connected. There's that natural maternal experience. As a guy, my idea is I'm never going to be able to relate to my child until he's old enough for me to step in and play ball. One time I actually took my son for a walk with my best friend who is not a parent. My son was in a Baby Bjorn and he was crying the whole way down the street. I started to sweat, and I didn't know what to do. Then I realized that when I put his pants on I had put both legs into one pants leg and he was just uncomfortable. When I fixed it, he was as happy as can be and I was thrilled I was able to take control of that moment and figure out what he needed. It's not a big deal. Babies have a way of expressing themselves. It's about getting involved and getting active that eliminates the fear that you're incapable of taking care of a child.

I think the biggest reason I'm excited about this book is that today's role for dads has changed dramatically mostly due to fact that women have challenged guys to take over. We're both balancing parenting and professional lives. It's so refreshing to see dads involved in their kids' lives. It's our duty to give our kids safety, security and support. That's, in my mind, what parenting means.