Difference Between Midwife and Doctor

Finding the right healthcare provider to deliver your baby means weighing your options. A local midwife speaks on the choices available. 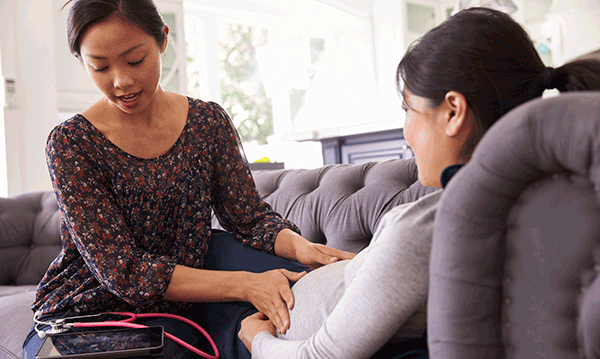 Birth is one of the most natural yet harrowing transitions for women. Not unsurprising, couples’ experiences often depend on their healthcare providers. While OB-GYNs and physicians continue to be the go-to care providers for delivering babies nationwide, certified-nurse midwives (CNM) and certified-professional midwives’ popularity may be on the rise.

But parents have questions when considering the M.D. versus midwifery. Not sure the difference between midwife and doctor? Wondering if a midwife might be the best choice for you? We spoke with Stacia Proefrock, CPM, owner of homebirth Trillium Birth Services based out of Ypsilanti and president of the Michigan Midwives Association. Here’s what she had to say.

Thinking M.D.s make doctors the superior storks of childbirth? Proefrock acknowledges this as a common conception, but physicians “can make it through all of that training without witnessing a single birth from start to finish and without managing very many normal labors.” Consider that midwifery students graduate with more than 1,000 hours spent with monitoring normal pregnancies and deliveries, she says.

Doctors, often taught to manage delivery rooms (they don’t attend home births) like war zones, are the experts on surgeries like caesarean sections and high-risk pregnancies. But midwives opt for an empowering and gentle touch for all pregnancies and labors evaluated as low-risk. Most births needn’t be approached as traumatic.

“Midwives are trained to evaluate risk in women,” just like physicians, to reduce the chance of birthday surprises. “We don’t pick everyone.” Women who want a vaginal birth after C-section (VBAC) have their surgical reports evaluated. Mothers with diabetes, a major heart condition or autoimmune disorders aren’t typically viable candidates for homebirth. But CNMs are much more likely to care for such women in a hospital setting, she adds, where they may consult with a specialist.

Many midwives, while ardent supporters of low-tech care, have access to the same prenatal testing as physicians, she says, such as genetic testing, ultrasounds and blood work.

And heavy-patient loads often reflect in physicians’ availability. To prep mom and dad, hospital-based midwives typically hold 20-30 minute appointments, while most physicians can meet for 10 minutes and homebirth midwives for up to an hour. Lengthier time slots mean more time to discuss “lifestyle, diet, stress, social situations, domestic violence and for establishing trust.”

Because doctors function to anticipate the “danger lurking around every corner,” they tend to have a higher rate of intervention, including induction, she says. But Proefrock adds she’s witnessing budding efforts by physicians to reduce instrument deliveries and elective induction rates by allowing more time for pushing, and more time between women’s water breaking and their labors. But “midwives have really led the way on those things.”

Midwives work to minimize the separation between moms and babies postnatal. And “with physicians, initial breastfeeding rates tend to be no higher than 75 percent,” while among homebirth midwives, the rate jumps to 99 percent, Proefrock says. Not to mention, “homebirth midwives tend to do home visits for the mother and the baby anywhere from three to six times within those first six weeks,” the usual first-time check-up postpartum for new mothers and doctors.

Charges for hospital-based care, whether to see a CNM or a physician, are comparable, she notes. Keep in mind “most homebirth midwives charge between $2,000 and $4,000, most hospitals charge between $10,000 and $20,000, so of course we’re much cheaper,” but most health insurances do not cover homebirths or birth center fees. Affordability depends on your deductible.

The U.S., a midwifery anomaly

A study published in the September 2016 issue of Obstetrics and Gynecology reports the maternal mortality rate is falling worldwide but on the rise in the U.S. Midwives deliver the bulk of developed countries’ babies, but not in the states, Proefrock says. “I don’t believe there’s not a disconnect between those two facts.” Only about 10 percent of American births are delivered by midwives, and about 1,000 babies in Michigan every year, she adds.

Ultimately, it’s your delivery, your choice. But consider these questions: Is vaginal birth your priority? Do you want around-the-clock support during labor? Do you want pain meds or a more natural approach? How much separation and rest do you want post-delivery? How much support do you want for your transition to parenthood? How much breastfeeding support? Are you considered a high-risk patient? Still on the fence? Go with your gut. Because moms know best.