What is Gestational Diabetes? An Expert Weighs In

Are you wondering 'What is gestational diabetes?' This common complication of pregnancy can usually be well-controlled but requires close monitoring. 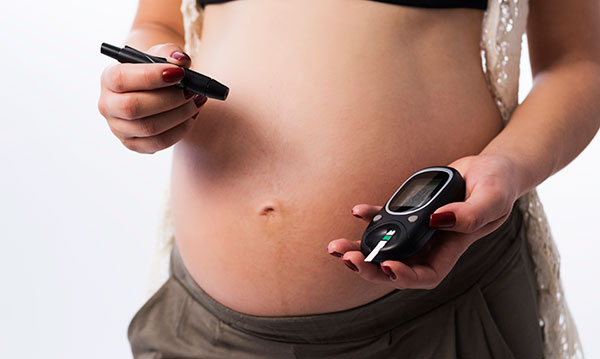 Farmington Hills mom, Christy Stevens, had all the typical cravings during her pregnancies – but not the fun of enjoying them.

That’s because she had gestational diabetes, a condition in which a woman who was not previously diabetic has high blood sugar levels during pregnancy.

“I was definitely not happy because when you’re pregnant you want to eat what you want, when you want it,” Stevens laughs.

But a carefully-planned diet quickly became her top priority – a task she found easier to achieve because she knew her child’s health was involved.

“Knowing that I was having this child and I didn’t want to have any issues for the baby made it easier for me to know I had to do it,” she says. “I was very strict … I really wanted to avoid having to go on any type of medication if I could.”

Stevens was able to manage her gestational diabetes with diet and exercise during both of her pregnancies. Calvin and Alena – 5 1/2 and 2 1/2 years old, respectively, as of 2016– were born healthy and without any complications.

Though it wasn’t easy, Stevens found that planning was key – a piece of advice she’d pass on to other moms diagnosed with gestational diabetes.

“It is tough because I was working full-time when pregnant so testing and all that can be very complicated and planning your meals,” she recalls. “Make sure that you plan your week, and have snacks ready to go.”

Dr. Melina Dendrinos, an OB-GYN at Henry Ford West Bloomfield Hospital, says women are tested for gestational diabetes during the second trimester of pregnancy – usually between 24-28 weeks – with a glucose tolerance test.

“That’s most commonly when it will be developing,” she says. “Almost always there are no symptoms – it’s almost always diagnosed with blood work.”

During the test, the patient drinks a sugary drink, waits an hour and then has her blood taken to test her blood sugar level. If it’s above a certain point, a three-hour test is needed before a gestational diabetes diagnosis is made.

Women diagnosed with gestational diabetes are typically referred to a dietician for diet counseling and asked to monitor their blood sugar four times per day – after waking up and after each meal.

“If the blood sugars are elevated outside the recommended values then we’ll need to start a medication – insulin or oral medication,” Dendrinos says. “The majority of women do well with diet.”

A variety of possible complications are associated with gestational diabetes including high blood pressure (preeclampsia); having a large baby, which can lead to a C-section or birth trauma; extra fluid around the baby; and low blood sugar in the baby after delivery.

“All of those are more common with poorly controlled blood sugars,” Dendrinos says.

“One of the reasons you develop gestational diabetes is the placenta makes hormones that cause some insulin resistance,” she explains. “The reason that happens is to make sure the baby has plenty of nutrients and blood sugar to it. It’s kind of a natural physiological process. So the problem is when the pancreas can’t produce enough insulin to compensate for that, those are the women who develop gestational diabetes.”

Though the diagnosis can cause worries for expectant mothers, they should feel reassured that gestational diabetes can usually be well controlled, Dendrinos says.

“Most people who are pregnant are expecting a nice, normal pregnancy so it’s always surprising to hear something is wrong, especially in a healthy person,” she says. “I tell (patients who are concerned) that it’s a very common complication of pregnancy, we have very good ways of treating it and in the majority of cases the outcomes will be very normal.”