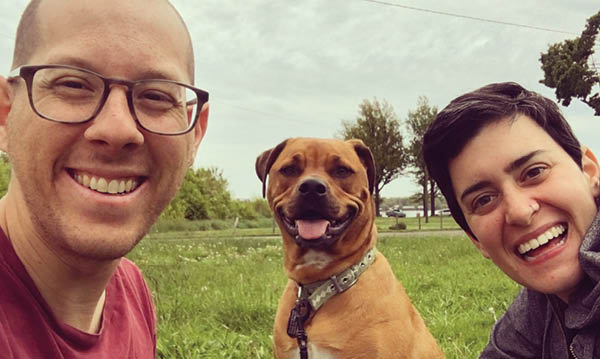 “Meet Zak and Shira. They’ve been together for 10 years. Shira wants a baby. Zak’s not so sure.” So begins a unique new podcast by a local couple.

Zak Rosen, 33, and Shira Heisler, 30, recently launched Pregnant Pause – a slowed-down look at whether or not they want to be parents. The Detroit duo met with friends, family, writers, scientists, therapists and philosophers to weigh the choice.

“I’m obsessed with podcasts and have for a while thought about making a show,” says Rosen, a freelance journalist. “So once Shira and I started talking about having kids, I realized I had a lot of unanswered questions.”

He says the goal of the nine-part podcast, a labor of love that took hundreds of hours of work before launching March 17, was to work through his reservations. “It’s me trying to unpack my anxieties about the big question. I do it through conversations with my wife and with other people.”

It took some convincing for Heisler, a physician who works full-time in pediatrics and internal medicine, to get on board the podcast train. But now, it’s kind of exciting: “I get nervous when an episode is released, but I found it overall to be a really fun and helpful and productive process,” she says.

“There’s such a stigma to not having kids, and I really hope that people leave this discussion thinking, ‘Either way is great, whatever the couple chooses,'” she adds. “I just wish there was an open conversation with no judgment, and I hope that’s what the podcast gives.”

So, what do they end up deciding? You’ll have to listen to find out every Friday through May 12.