Smoking Among Pregnant Women on the Rise in Michigan

Kids Count Michigan reveals an increase among expecting moms in the state smoking cigarettes. Experts theorize why and emphasize the dangers. 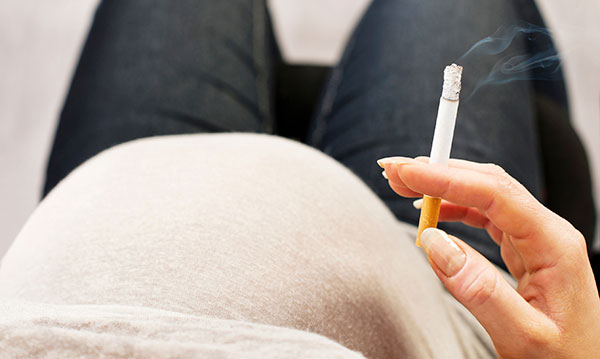 A shocking new report released by Kids Count Michigan shows a sizable spike in the number of pregnant women who are lighting up cigarettes.

From 2008 to 2014, the number of expecting moms smoking jumped 18 percent in the Mitten State, a press release from Kids Count Michigan notes. The highest rates were found in Michigan’s northern Lower Peninsula and in the Upper Peninsula, which are comprised of many rural counties.

Smoking while pregnant remains highest among white mothers, though the state saw an increase across ethnic groups, with the largest being among Hispanic moms-to-be.

Kids Count Michigan draws correlations between these smoking stats and the number of pre-term births in Michigan, which is up 20 percent throughout the state. Pre-term births, those occurring before 37 weeks gestation, are associated with smoking while pregnant.

“With all of the information out there on the risks of smoking, the increase in pregnant women who are smoking in this day and age is particularly startling,” says Alicia Guevara Warren, the Kids Count in Michigan project director, according to the release. “With these numbers, you would think it is 1986, not 2016.”

Dr. Monica Lee-Griffith, director of obstetrics at Henry Ford Heath System, was also surprised to hear of these findings.

Maybe these statistics would have been slightly less startling if this were about 30 years ago. “Smoking tended to be the norm even 30 years ago. People were smoking at work,” she says. But over the last 10 to 20 years, she says, the dangers of smoking – for baby and for mom – are better known.

Dr. Lee-Griffith explains the negative impacts of smoking while pregnant “deal with the effect it has on the placenta.” Smoking decreases the blood supply to the placenta, which she explains is the “nutritional basis” for babies. Babies in the womb also experience a decrease in oxygen, and moms risk having smaller babies, having preterm deliveries or experiencing stillbirth.

Why are numbers up among women in Michigan? Dr. Lee-Griffith has an idea, based on the findings. Rates were higher in rural areas of the state. “Those citizens don’t have the same access to health care as we do in more urban environments,” she says.

At Henry Ford, doctors screen patients for smoking as part of their initial evaluations, she says. Then, doctors can educate, recommend programs and even suggest medication to help pregnant women quit smoking.

There are other factors to consider, too. Warren at Kids Count Michigan attributes increases to slashed state and federal funds for smoking prevention and programs. For 2017, the press release notes, “smoking prevention and cessation initiatives were funded at $3.78 million, which is down 34 percent from budget year 2008.”

“Funding and programming cuts clearly have consequences, and the state urgently needs to reinvest in evidenced-based smoking prevention and cessation efforts for pregnant women,” Warren states in the release.

Dr. Lee-Griffith also hopes to see some changes now that these statistics have been publicized, noting hopefully legislators will see this funding is important to get the word out to patients who don’t have the same access.

The study does note there were some positive findings for moms and babies from 2008 to 2014, including reduced rates of teen pregnancies and repeat teen births. Our state also had less women with no high school education or GED giving birth and a drop in the number of women receiving late or no prenatal care.

For more on the findings, take a look at this report.