Birth centers offer an alternative to the hospital experience that is safer than a home birth. Find out more about birth centers here. 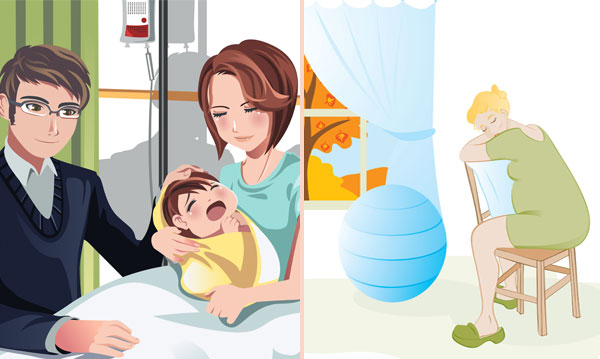 Women have babies in a variety of ways. There are those who have their babies in a traditional delivery room, while others have them in operating rooms with a cesarean section. Some women want to have them at home to avoid medical intervention. For those who want to attempt labor in a home-like setting with the security of a hospital and all the life-saving equipment nearby should something go wrong, there are birth centers.

The Karmanos Center for Natural Birth at Beaumont Hospital in Royal Oak and the Alternative Birth Center at Providence Hospital in Southfield are two options for a hands-off birth process.

Giving birth in a home-like setting

Both of the birth centers offer queen beds, Jacuzzi tubs, aromatherapy, showers and nurses who are specially trained in natural childbirth, including relaxation techniques, pain control alternatives and general support during labor. They do not offer Pitocin to kick-start slow labor, epidurals for pain or cesarean sections like a typical hospital would. Neither birth center does continuous fetal monitoring during birth either.

Paula Fishbaugh, an obstetrician at Beaumont Health, says the almost-year-old Karmanos Center for Natural Birth was the brainchild of Danialle Karmanos, who had several natural births. She wanted to provide women with the option to have a home birth in the security of a hospital.

“She had this idea to create an environment that is very home-like. There is nothing that looks medical about it. The whole décor is soothing,” Fishbaugh says. She adds that even the medical equipment is hidden in walls and within the décor to make the mother feel as though she is anywhere but a hospital.

Carol Fuller, director of Women and Children Services at St. John Providence Health System, says home births are becoming popular, but there are many complications that could occur to put mother and baby in jeopardy.

“It isn’t safe, in many cases, to do your birth that way. We can provide you that same experience here, but we can give you that safety net should something go wrong,” Fuller says. “We wish more women would choose natural childbirth because it’s healthier for them and healthier for the baby.”

Who shouldn’t deliver at a natural birth center

Not everyone is eligible to be a candidate for the natural birth center.

“They can’t have medical problems or complications in pregnancy for either mom or baby. They can’t need continuous monitoring,” says Fishbaugh.

Those who want to give birth at the Karmanos Center must deliver babies between 37 and 42 weeks. The pregnancy must be low-risk. The mother must complete natural childbirth preparation and agree to be transferred to a traditional labor and delivery room if complications arise or if the mother chooses to use an epidural or needs Pitocin.

“Patients who want to have their baby in the Alternative Birth Center need to sit down with their provider, either a midwife or physician, and evaluate her specific risks,” says Fuller.

The Alternative Birth Center is staffed with midwives with access to physicians if the need arises. Physicians, such as Fishbaugh, and midwives deliver at the Karmanos Center for Natural Birth based on the patient’s preference. Both Fishbaugh and Fuller say the specially-trained nurses make the birth centers successful.

“The natural birth nurses are unique. They have a philosophy of nursing that is very distinct. It’s a very holistic type of nursing. It takes a very special type of person to be a nurse as it does a midwife. They truly believe in the natural childbirth process,” says Fuller.

Fishbaugh says the Karmanos Center for Natural Birth nurses are trained in aromatherapy, pain management alternatives and helping mothers through the most difficult parts of labor.

Tareeshia Sapp, a Clinton Township mother of four, had her first child in the traditional hospital setting, but the others were born at the St. John Providence Alternative Birth Center.

“When I got pregnant, I knew I didn’t want any intervention or an epidural. My experience during birth was basically like fighting with someone to maintain my wishes,” says Sapp. After talking to a nurse who works in the Alternative Birth Center, she was told it didn’t have to be that way. For her future children, she made the switch to the birth center where she felt more supported.

“It’s a culture at the Alternative Birth Center of the mom knows, trust the mom and go with her instincts. It’s a very hands-off experience, but there are midwives and nurses there to assist you if you need them. I labored and birthed and it was basically my husband and me. We were able to use aromatherapy, subdued lighting and have music playing. It’s basically whatever you want it to be,” says Sapp.