Depression and Anti-Depressant Use During Pregnancy Impacts Fetal Brains 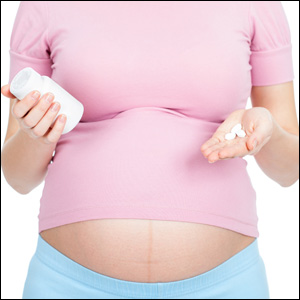 Approximately 14-23 percent of women will experience a form of depression during pregnancy. The mood disorder can turn a normally joyous time into a confusing, stressful and deeply saddening experience. Many find relief with support groups or therapy, but when more help is needed, some turn to anti-depressants.

While the effects of taking these medications during pregnancy have long been debated, a new study from the National Academy of Sciences has shed more light on the issue. The study finds taking common anti-depressants (SRIs or serotonin reuptake inhibitors) may alter the language processing and development of the child.

While the conclusions about anti-depressants are important, the study indicates not only that medication has an impact on this developmental process – but that untreated depression alone can also lead to changes in this important stage of development.

How the study worked

The study, published earlier this month, focused on fetuses and children of three different groups of pregnant women. One group showed no signs of mood disorders. Another group of moms was depressed but taking SRI medications. The last group was also depressed, but un-medicated.

Using different techniques, the researchers measured the vowel and consonant discrimination abilities of different ages and stages of fetuses and children of the women from the three groups.

At 36 weeks, the researchers placed speakers up to the mothers' bellies, measuring the fetuses' heartbeats. The speakers played a consonant sound that would change to another consonant, and then vowels to another vowel. When a heartbeat changes, it is taken to mean the fetus can discriminate between the sounds.

They then looked at the same babies when they were 6 to 10 months old. Here, they turned their attention to "natural-born auditory capabilities" and the changes that occur as we grow. Research shows that until 8 months of age, children can discriminate between the sound "da" as spoken in Western languages and in a Hindi variant. But non-Hindi children who don't hear the Hindi variant will lose the ability after that age.

The babies from the non-depressed mothers behaved just as they did in previous studies. But, among the medicated mothers, babies' ability to differentiate between the "da" pronunciations was already gone by 6 months. This could mean children of SRI-exposed mothers have accelerated language-processing developments.

Kids of depressed mothers who were not on medications, however, were slower to develop, still discriminating the "da" sound at 10 months, researchers found.

It seems both depression and anti-depressant medicines can cause changes in babies' brain developments. So neither is "better"" than the other, the authors of the study say.

The University of Michigan Women's Hospital in Ann Arbor offers information for pregnant women with depression. It suggests attending childbirth classes or finding a new mother's support group if you feel you need help to get through your pregnancy.

The new study reinforces this idea. Perinatal depression, treated or untreated, can lead to changes in the development of a fetus. Regardless of such findings, the use of anti-depressants during pregnancy will likely continue to be a hotly contested issue amongst researchers and doctors.

These 8 reading apps for kids are sure to help them get excited about reading this school year and beyond.
Read more
Macomb County Education