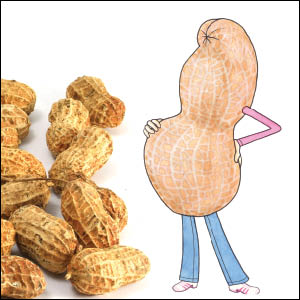 Raw shellfish, raw eggs, deli meat and soft cheeses. Expectant moms are advised to avoid a long list of foods to reduce the risk of birth defects and miscarriage. And, when it comes to lessening the chances of allergies, moms-to-be should step away from the PB&J.

"Up until early 2000, women were being instructed to avoid peanuts and other highly allergenic foods," says Dr. Christian Nageotte, program director of allergy and immunology fellowship at Henry Ford Hospital, who works in Novi, Sterling Heights and Dearborn.

"The old thought was the system was immature and in chaos," adds Dr. Jennifer Appleyard, chief of allergy and immunology at St. John Hospital & Medical Center in Detroit. "You wanted to try to avoid anything that they could be allergic to."

So moms were told to skip the peanuts and tree nuts, which include pistachios, cashews, pecans, hazelnuts, almonds, walnuts, macadamia nuts and Brazil nuts.

But that didn't seem to stop the trend. In fact, the number of kids with nut allergies tripled between 1997 and 2008, according to the nonprofit Food Allergy Research & Education.

And now, it turns out, moms can eat peanuts and tree nuts during pregnancy – according to a new study that found kids born to moms who ate these foods while pregnant actually had a lower risk of developing nut allergies.

In the study, five researchers – all pediatric/women's doctors in Boston – looked for a link between a pregnant woman's nut consumption and the risk of allergy in her kids.

They examined data from the Nurses' Health Study II, which began in 1976 and is one of the largest, longest-running studies of its kind. Women reported their diets during pregnancy and then, in 2006, their offspring reported any food allergies they had.

Among 8,205 total children, 140 had peanut and tree-nut allergies. The new study, published in JAMA Pediatrics, concluded that the odds were "significantly lower" in the kids of the 8,059 nonallergic mothers who ate more of these nuts when they were pregnant.

For these researchers, the data displayed a correlation between early exposure to an allergen and a lower incidence of the allergy later in life. Could early exposure be the key?

That's still up for debate, Appleyard says. While doctors are currently rethinking the recommendation to wait three years to expose kids to nuts, Appleyard doesn't suggest fixating on the study as fact.

"I wouldn't hang my hat on this," she says. Allergy-related findings are complex and ever changing. But one thing you can be sure of, Nageotte says, is the prevalence of allergies in children with allergic parents.

"If one parent has an allergy of any type, the child has a 30-percent risk of having some allergy," Nageotte says. That's not necessarily the same allergy, he points out.

If both parents are allergic, there's about a 70-percent risk that their child will have some kind of allergy. Plus, siblings of kids who have peanut allergies were 7 percent more likely to have that same allergy.

When it comes to consumption of peanuts or tree nuts – and as long as mom isn't allergic to the food she's eating – Nageotte says moderation is key.

Getting an expert opinion is imperative, both doctors say.

"I think that women should speak to their obstetricians," Nageotte says, to make sure they are getting the proper nutrients during pregnancy.

"If the mom-to-be has some type of allergy, discuss it with their allergist – as they know them the best," Appleyard adds.

Continue to consume healthy foods during pregnancy, Nageotte says, to ensure that the baby is in good health.