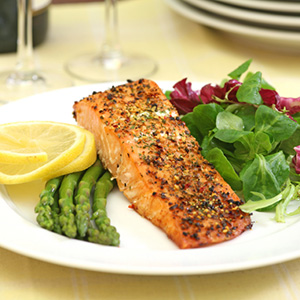 Fish is a great source of omega-3 fatty acid, plus it's low in fat and calories and high in protein, explains Shawna Broida, R.D., a dietitian at Henry Ford West Bloomfield Hospital.

Recently, the U.S. Food and Drug Administration released a draft of proposed recommendations for the minimum amount of seafood pregnant women, breast-feeding women, women who could become pregnant and young children should eat per week.

The new guidelines, which entered the public comment stage in June and were drafted by both the FDA and U.S. Environmental Protection Agency, suggest women who fall in these categories as well as young children should be eating a minimum of eight ounces of low-mercury fish or shellfish each week. In previous years, the agencies only recommended a maximum amount, a press release from the FDA notes.

"For years many women have limited or avoided eating fish during pregnancy or feeding fish to their young children," Stephen Ostroff, M.D., acting chief scientist for the FDA, said in the release. "But emerging science now tells us that limiting or avoiding fish during pregnancy and early childhood can mean missing out on important nutrients that can have a positive impact on growth and development as well as on general health."

The maximum amount hasn't changed since 2004, remaining at 12 ounces per week.

Broida says the change is important to note, since the recommendation is being handled differently than in the past, when the focus was on limiting and restricting intake of seafood.

"Some women decided to just not eat fish at all during pregnancy," she notes. Rather than trying to remember what fish to avoid, they say, "I will just skip it."

But Broida emphasizes fish, with its omega-3 fatty acids, is great for heart health and inflammation. Fish is especially important for kids and women who are pregnant, since she explains it's shown to be great for brain and vision development.

While it's a great idea to add seafood to your diet, these groups should still be particularly mindful of seafood high in mercury, which Broida says is important to avoid for neurodevelopment purposes. The FDA suggests avoiding:

Fish that is low in mercury and is recommended by the FDA for these groups include:

The FDA also notes white albacore tuna should be limited to six ounces per week. Broida explains albacore tuna contains about three times the amount of mercury than is found in light canned tuna. For fish caught locally in streams, rivers and lakes, the FDA is proposing to check with local authorities, or limit to six ounces a week or 1-3 ounces for kids.

When cooking fish, a safe temperature to cook to is 145 degrees, and eating raw fish like in sushi is not recommended, Broida notes.