After anticipation and excitement, baby finally arrives. While it's supposed to be a happy time for families, many mothers battle postpartum mood disorders. 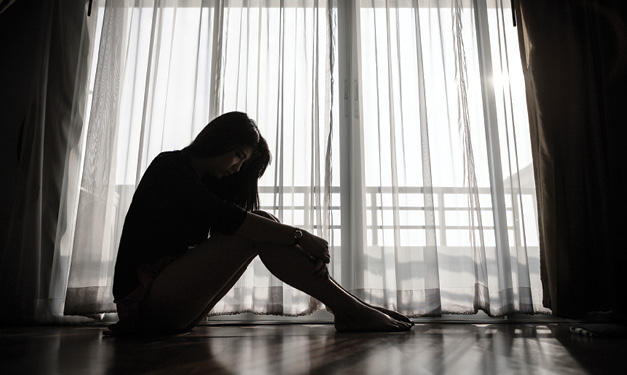 Maureen Roland* of Clinton Township and her husband welcomed their first child, a baby girl, in 2008 after a traumatic labor and delivery that capped with six hours of pushing. Much to her surprise, Roland felt little connection to the baby she had carried inside her for nine months – and whose arrival she had anticipated with great excitement.

These feelings worsened as the baby developed colic and screamed day and night with only occasional 20-minute cat naps to cut the cacophony. Exhausted and stricken by frequent panic attacks, Roland suffered silently for almost two months before calling her OB for help.

“I remembered that a nurse at my OB’s office had mentioned before the baby was born that it would be a lot harder than I realized and that I should come back if something wasn’t feeling right,” Roland recalls.

“I was so upset,” she says. “Everything you read says to call your doctor if something is wrong. I did that and still couldn’t get help. At each step, I had to explain to a new receptionist, nurse or doctor what was happening, and it was so shameful. I blamed myself, thinking obviously there is something wrong with me if it’s this hard to get help.”

Roland started feeling her daughter would be better off without her. She began Googling postpartum depression resources and stumbled across Tree of Hope Foundation – and soon was in touch with a rep from this nonprofit created to provide hope and help to women battling postpartum mood disorders.

“She encouraged me to come to a local support group meeting,” Roland recalls. “I had assumed I would need a diagnosis or a prescription, and she said nothing was needed and attendance was free.”

Her first meeting was instant relief as she and six other women shared stories. “I connected with someone, finally, for the first time in months.”

The meeting was led by a licensed facilitator, and Roland attended for a month and a half before seeking counseling with a private therapist.

“It sounds naïve, but I didn’t know I could just call someone in the phone book and be seen,” Roland says. “I thought I had to have an official postpartum depression diagnosis. I learned through Tree of Hope that I could get counseling, and it might even be covered by insurance.”

The support group, counseling and prescription medication she eventually went on helped Roland emerge from the fog that had consumed her. She was so thankful to have found Tree of Hope that she now volunteers with the organization and regularly shares her story with other moms who are struggling like she did.

Dr. Mark Dykowski, M.D. is an obstetrician and gynecologist at Generations OB-GYN in Birmingham. He acknowledges that most new moms don’t want to say anything about the negative emotions they’re experiencing.

“They feel they aren’t being the good mother they’re supposed to be,” he says.

When he sees new moms at their postpartum visit, Dykowski asks each patient how she’s doing emotionally.

“Typically, she’ll say she’s fine, but often her husband will chime in, mentioning how she hasn’t been eating or sleeping. It’s so important to involve family.”

Dykowski says symptoms of postpartum depression can include sleep disturbance, decreased energy and appetite, anxiety and irritability that is out of character, anger or an inability to care for the baby.

Dykowski insists that patients who call with symptoms come in for an exam.

“We’ll look at you, ask how you feel, take your blood pressure,” he notes. “It’s important to acknowledge to patients that this is a very common problem and that they are doing nothing wrong.”

Even if it’s after-hours, Dykowski encourages patients to call their doctor if they are having thoughts of harming themselves or their baby.

“In those cases, we instruct patients to go right to the emergency room,” he says.

Elizabeth Pruzinsky is a licensed therapist from Mount Clemens who facilitates the St. Clair Shores Tree of Hope support group. She specializes in postpartum women and notes there are many perinatal mood disorders beyond baby blues and postpartum depression.

Postpartum OCD, for one, can involve intrusive or obsessive thoughts, many times prompting moms to avoid doing simple activities with their baby like going down the stairs or driving in a car for fear of the baby being injured. Postpartum PTSD, meanwhile, can result from something unexpected, like an emergency C-section that was traumatic.

“It may manifest in her inability to drive by the hospital where the baby was born, or nightmares,” she says.

Even rarer is postpartum psychosis, affecting around one in 1,000 women.

“Symptoms include seeing or hearing things, severe insomnia, loss of appetite and thoughts of harming self or others. These women need to be hospitalized.”

Pruzinsky wants women to know they are not alone and that these are treatable illnesses. “It can feel so isolating when you’re in it,” she says. “But there is light at the end of the tunnel.” Dykowski and Pruzinsky acknowledge medication can be of great help, and that there are drugs safe for pregnant and nursing mothers.

“Likewise, talk therapy has been shown to be just as effective as medication,” Pruzinsky says. “Empower yourself about where to get help.”