Postpartum Depression in Dads: Signs and What to Do

Can dads have postpartum depression? You bet. Learn more about identifying and supporting new dads with the postpartum blues. 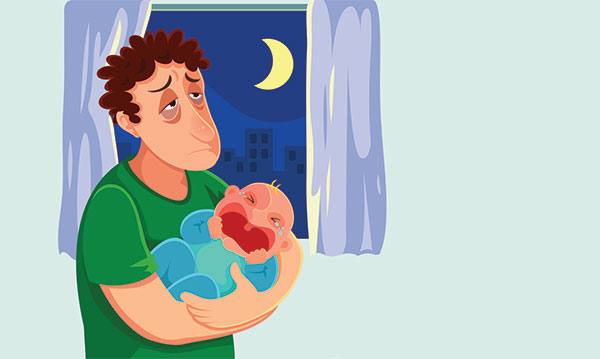 Though Chris Pegula’s kids were 17, 15 and 12 when this article was published, he still remembered what it felt like to experience the huge life adjustment of becoming a new dad. From bringing home new babies to having their youngest son born prematurely, fatherhood certainly came with its highly emotional moments.

“I think that the postpartum depression for men does set in the sense of everything is just so new,” says the author of From Dude to Dad: The Diaper Dude Guide to Pregnancy and Diaper Dude: The Ultimate Dad’s Guide to Surviving the First Two Years, which hits shelves in May 2017. In both books, he addresses the major life changes and even postpartum symptoms dads can experience.

This especially is the case when trying to figure out their place in their new family. It’s overwhelming and it’s shocking when the flood of emotions comes on, Pegula explains. “It’s a really challenging experience.”

“One in 10 dads will experience some sort of depression or anxiety or psychological issue in the year following the birth of a child,” says Kelly C. Ryan, LMSW, who is the Beaumont Parenting Program’s postpartum adjustment coordinator. The number for women is around 1 in 7. “With both of those numbers, I feel like the numbers are actually probably higher because we know that there are cases that go undetected.”

In dads, she argues, that’s probably even more true simply because of the stigma some feel.

How it happens for men

“I think what … people recognize is sometimes happy events can be extremely stressful and I think new parents have this idea that if they feel overwhelmed or depressed or angry or irritable that somehow something’s wrong with them,” Frank says.

For new dads, life is incredibly different right away. There are financial considerations, loss of intimacy with spouse, sleep deprivation and struggles with emotional intimacy with new baby and mom.

“The new mom is bonding with the child and the father may have been the soul source of their love and attention – and now they’re learning to share,” Frank says.

Ryan also notes dads don’t always feel the bond with their new son or daughter right away. It can seem like a bit of an outsider experience.

“Moms without really knowing they’re doing it tend to kind of take over and they’re doing everything – and maybe inadvertently excluding dad from that caregiving piece,” Ryan says.

There’s also a chance dad could develop postpartum depression if their partner is experiencing it, Ryan says. “One of the things that the research shows is that if mom is depressed there is a very good chance that dad is also experiencing those symptoms.”

Ryan references research about postpartum depression, noting even dads do experience some changes in hormones, like decreased testosterone and increased estrogen levels. Coupled with sleep deprivation and all of the other changes, “(it) kind of creates this perfect storm.”

“Even non-postpartum wise, we know that men and women may have different presentations of depression,” Frank says. While women experience change in sleep patterns, appetite, energy level and may cry more easily, men will become more angry, irritable and maybe even take more risks.

“I think sometimes men are lost in the shuffle because they aren’t always the classic symptoms we see with women,” she says.

Ryan notes sometimes symptoms of depression in men can include anxiety, headaches and physical changes like weight gain.

Because of the range of symptoms, she says, men may even miss their own signs of depression.

Luckily, dads can find help, support and resources in several places, including through the Internet and books.

And in his book Diaper Dude: The Ultimate Dad’s Guide to Surviving the First Two Years, Pegula writes about the importance of dads having open communication with their partner.

“Really be open with your partner and (don’t) be afraid to share those fears that you have,” he says. Even when bottling those emotions in, your partner will still be able to sense something is going on. “That’s actually something that would be beneficial for partners to realize. Observe your husband to be able to call him out on it in a positive way.”

Try spending time reconnecting as a couple – or talking with friends who are also dads. Pegula also encourages dads to prioritize self-care. “Doing things to help yourself feel good like exercise, like making time for yourself to meditate or do those things that you need to do for yourself. The same holds for your partner to be able to give her that time.”

Utilizing resources around the community is key to coping and healing. Beaumont offers a postpartum adjustment support group at spots throughout southeast Michigan for those coping with postpartum depression. It’s open to moms and dads and registration is not required. Parents can learn more by calling 248-898-3230.

Most importantly, medical professionals urge dads to speak to their primary care physicians about what they’re experiencing – or visit a therapist to work through their depression, especially if they are having thoughts of suicide, hopelessness or are having trouble functioning at home and at work.

“Those are the times where we really want to seek some professional advice,” Frank says.

One of the best things dads can do is be vocal and open about their struggles with postpartum depression, Pegula says. “Our society drills into us that we’re supposed to be the strong one, we’re not supposed to be emotional,” he says – though attitudes about that are changing and dads are being more open in spaces like the Internet. “It’s about really not being ashamed to be sad and to be fearful and to be scared. I think those are really helpful emotions to acknowledge and to experience.”

“People should know that they’re not alone, it’s common and it’s 100 percent treatable. It’s very important to encourage moms and dads if they are not feeling like themselves to get some help,” she says.

What is known about postpartum is while treatable, “if left untreated, it can become a chronic problem.”