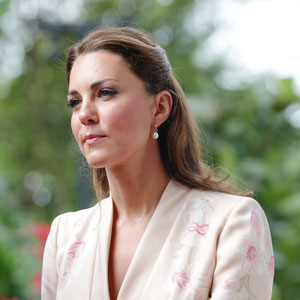 Kate Middleton's recent hospital visit is big news. It turns out the princess and her husband, Prince William, are expecting their first child, St. James Palace reports – and the duchess is being treated for a rare, severe form of morning sickness.

According to BBC News, the duchess was admitted for treatment of the condition, known as hyperemesis gravidarum, or HG. That prompted the palace to announce the couple's pregnancy.

Although the palace refused to comment on how far along Middleton is, BBC News reports that mom-to-be is likely less than 12 weeks pregnant.

Learn more about hyperemesis gravidarum and the effects of the extreme morning sickness.

Middleton, who was last seen on Friday, Nov. 30 visiting her old school, is being treated at the King Edward VII Hospital, with Prince William by her side. The hospitalization gives the happy news a serious tone – and brings the condition into the spotlight.

"As the pregnancy is in its very early stages, Her Royal Highness is expected to stay in hospital for several days," a statement from St. James Palace noted simply, "and will require a period of rest thereafter."

So what does this mean for the mom-to-be and her bundle of joy? According to the U.S. National Library of Medicine, "hyperemesis gravidarum is extreme, persistent nausea and vomiting during pregnancy that may lead to dehydration." In addition, this severe nausea also could happen during pregnancy if the mom is carrying twins.

ABC News reports that this form of morning sickness "poses little danger to the tiny heir," since nausea and vomiting are common during pregnancy. The report went on to say that the sickness typically resolves itself by 16 or 20 weeks of pregnancy – although, in some cases, it can last the entire nine months.

Once born, the son or daughter of the duke and duchess will be third in line to the throne – following Prince Charles and Prince William.