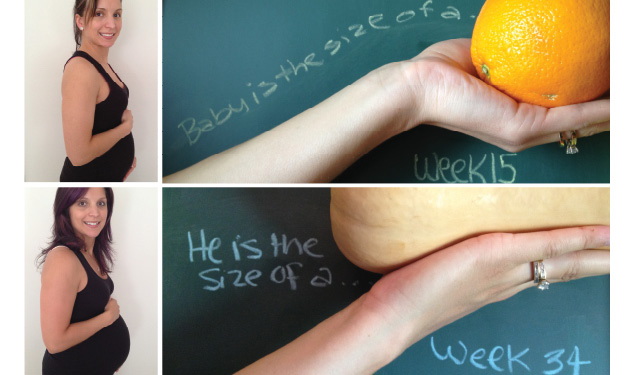 It’s a phenomenon of parenting that it’s first children who have baby pictures galore – and the up-to-date baby books. Second and subsequent kids? Not so much.

But sometimes the second gets lucky, and has creative parents who come up with even cooler ways to mark their childhoods than the first kid had. That’s true for Jason and Rebecca Bolton’s baby-to-be. When the Ypsilanti couple was expecting their daughter Kara, who is now 2 1/2, they did the standard week-by-week belly shots. But for child No. 2, a boy due any minute now, they found an inventive way to let friends and family know how things were progressing.

Along with the profile belly shots, Jason, a graphic designer, has photographed his wife, who goes by Becca, week by week holding a fruit or vegetable that corresponds to the baby’s size, from an apple at 12 weeks to a squash at 37 weeks.

“It’s a little bit like a movie sequel,” Jason says. “You have to go even better with the second one.”

It’s garnered great response from family and friends who track their progress on Facebook, Becca says. The only problem has been acquiring the right fruit and having it be the right size. Sometimes it was hard to find an onion bigger than the previous week’s orange, for example.

And sometimes, finding exotic stuff has been a challenge. Exhibit A: One week the fruit was a durian, an Asian delicacy that may taste nice but smells horrible – and costs a lot of money on these shores.

Becca has found creative ways to use up the fruits and veggies as well; she cooked and pureed the butternut squash, for example, and froze it to use as baby food when their little guy is ready. And luckily, she hasn’t had any food aversions.

“We haven’t really had any issues, except for me sitting there trying to hold the fruit while it gets heaver and heavier – that durian was heavy!” Becca says.

Once baby boy gets here (they aren’t sharing the name they have chosen until he is born), they plan to do an album of outtakes from the week-by-week photos, just as they did with their daughter’s week-by-week photos from her first year. Instead of the lovely, glowing pictures, this offers a glimpse into what went into getting those perfect shots.

Both Boltons says they and Kara are ready for the baby to arrive: As second-time parents, they’re aware of the demands of caring for a newborn, and they have been doing a lot to prepare Kara for her role as a big sister. “I’m just kind of, ‘hang on tight for the ride!'” says Becca.