Throwing a ‘Dadchelor’ Party for Dad-to-Be

'Man showers' are a growing trend. Here are some dadchelor party ideas to celebrate a soon-to-be dad. 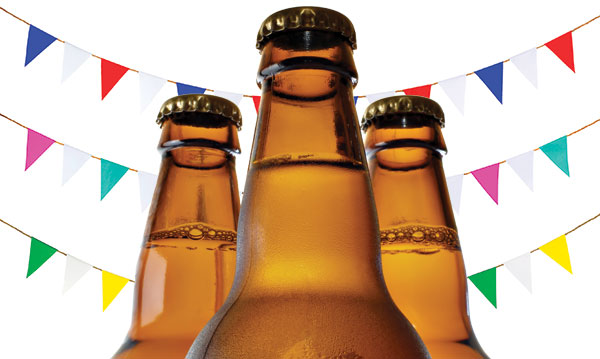 Type “dadchelor party” into your Pinterest search bar and prepare to laugh. From “Baby-Qs” to “Poker and Pampers” parties, the ideas for celebrating expectant dads and their next gen range from cute to clever to downright kooky.

Phill Palmer, the man behind the UK blog Corporate Dad, thoroughly enjoyed his man shower when friends gathered to celebrate the impending arrival of his daughter with a “Diapers and Dudes” bash.

“Women have baby showers, and I had 10 blokes eating baby food and drinking beer from a bottle,” he recalls. “Why should the girls have the fun? I brought the beer and they brought fun and friendship into a time where I really didn’t do much apart from clean and help as much as I can.”

A twist on traditional

A somewhat regular centerpiece at traditional baby showers is a diaper cake – a tiered assortment of burp cloths and diapers for the new mom. Many a dadchelor party takes a more humorous bent with a “cake” featuring diapers and brews. In fact, diapers (and beer) seem to be common fixtures of dadchelor parties, often taking the place of more traditional gifts.

Ann Duff of Livonia organized a dadchelor party of sorts for her husband Tim before the birth of their now-2-year-old daughter Kinsley. She invited Tim’s closest guy friends to the house for food and libations.

“I made Crock-Pot pulled pork, chips and dip and, of course, had beer for the guys,” she recalls.

The guys ate and then hit the links before returning to the Duff house to hang out and enjoy the cake Ann’s friend made special for the occasion. The guests each brought diapers and wipes or a toy for the expectant couple.

“I highly recommend the diaper party for a guy,” Ann says. “It allows him to celebrate his upcoming baby and spend time with his friends.”

The diapers help, too.

“We were set for six months!” Ann says.

How to plan a dadchelor party

Among them are games like a diaper-wrapped football toss, baby stroller relay and baby food eating challenge. These and other ideas are outlined in the ManShower Legacy Party Plan – a PDF available for free upon request.

“Guys want the easy button,” Dexheimer says. “Every dad loves to attend a fun party but never wants to plan it.”

Dexheimer and Moniza take that work out of the equation with themed party ideas like “Rock ‘n’ Roll” man shower, ManShower Super Bowl and ManShower Survivor.

“These parties are about creating memories for dads,” Dexheimer says. “Having a baby is a big deal.” He says the gifts given at man showers tend to be more low-key than traditional baby showers.

“You’ll see guys bring a box of diapers, a bottle of wine or some craft beers,” he says. “It’s less about the gifts and more about the experience.”

While Pinterest and other websites have the potential to overwhelm with ideas, dadchelor parties need not be elaborate affairs. Candace Kerrar of Lansing says her husband Tim appreciated the casual diaper party co-workers threw before the birth of their second son. The setting? An office conference room – with cupcakes and ice cream on the menu.

“A collection of monetary donations was made prior to the party,” Kerrar says, “and a wealth of diapers and wipes were purchased with the money.”