How to Prevent Diaper Rash in Babies

Plus tips on how to treat diaper rash – straight from a local pediatric nurse practitioner. 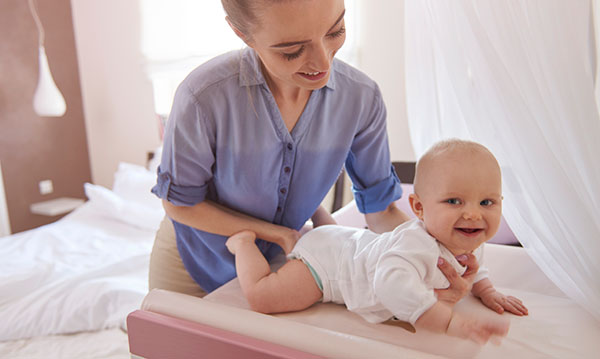 Burning bums and blistering red bumps are a common issue for most babies under age 2. Before the potty training and big kid pants, many babies endure the painful realities of diaper rash.

Although most parents on diaper duty do their best to minimize the pain and irritation, diaper rash seems to be a never-ending battle — joining reflux as a baby issue that commonly reoccurs.

Jill Rembinski, a pediatric nurse practitioner from Henry Ford Medical Center-Farmington Road in West Bloomfield, gives tips and tricks on how to prevent diaper rash and treat it if it occurs.

Why does diaper rash occur?

Diaper rash is a breakdown in the skin barrier that can cause irritation, bumps and burns in the bottom, thighs and even lower back.

While you may frequently change your wee one and use sensitive soaps during baby’s bath time, your child’s diaper rash could potentially be caused by a number of other things.

Some common causes of diaper rash include skin sensitivity, diarrhea, tightness of the diaper itself and even the type of diapers you may use.

How to prevent diaper rash

The best way to prevent diaper rash all together is to stop it before it has even begun. It is important to change your baby frequently, ensuring that he has a clean, uncontaminated area for his little bum.

When cleaning your baby, it’s OK to use baby wipes, but Rembinski says you should avoid using baby wipes with fragrances and dyes when your baby has diaper rash. Alternatively, clean the area with a warm wash cloth and water, pat instead of rub, and give extra airtime before putting on the next diaper.

“If your child is especially sensitive to diapers or prone to getting rashes, apply a lubricant or cream daily to prevent a rash from developing” says Rembinski.

These lubricants create a barrier between the diaper and your baby’s sensitive bottom.

How to treat diaper rash

“The key ingredient in any cream or paste is zinc oxide,” Rembinski says. “Any type of diaper rash remedy with zinc oxide is extremely effective.”

Some zinc oxide infused remedies are Triple Paste, Aquaphor, Butt Paste and even Cetaphil. These treatment options can be very effective when it comes to ridding your baby of their painful rashes.

Within two days of using these pastes and creams, you should see improvement in the skin, such as a decrease in inflammation. If this is not the case, contact a local pediatrician for further treatment.

If you are looking for some simple home remedies, try giving your baby a substantial amount of airtime. This will allow your baby’s bottom to get some time away from the friction of that diaper.

If you are suspicious that a new food could be contributing to the rash, introduce the new foods alone for three to four days to see if your child is sensitive to those specific meals.

What to avoid when it comes to diaper rash

Although many parents think that powders do the trick, “I would avoid powders altogether. It is very easy for a child to inhale them, possibly causing respiration issues. It is not worth the risks,” Rembinski says.

Steroid creams are also something to avoid unless your health care provider gives the OK. Avoid anything with fragrances or dyes — this includes the detergent that you wash your child’s clothing in.

“Look for any form of redness, bumps and signs of irritation,” Rembinski says. It is important to catch the rash before spreads.

So next time you spot any redness whatsoever, begin treatment and save your baby from a case of the burning bum and blistery red bumps.

To schedule an appointment with Henry Ford doctor or medical professional, visit henryford.com.