How to Talk to Your Baby, Speaking Parentese 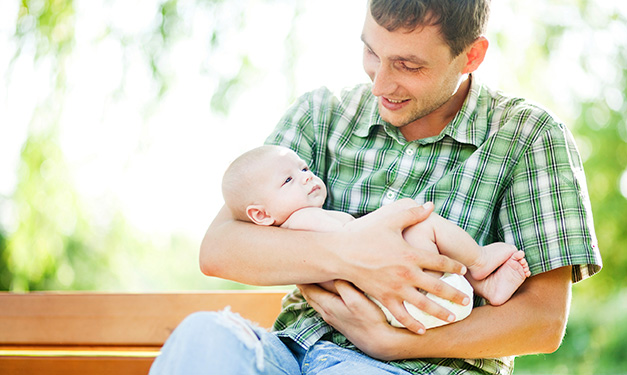 It's no secret that babies absorb everything like a sponge. In fact, in the first three years of life, a baby's brain nearly triples in size, but it doesn't happen on it's own. It happens when your baby interacts with the world and people around them. What is the best way to interact with another human? By talking of course!

Baby talk can be incredibly beneficial for your child's cognitive development. Babies will begin to distinguish their mother's voices and other important sounds within the first few months of life and as time goes on they will begin to respond to these sounds, says Dr. Stefanie Hines, the chief of developmental and behavioral pediatrics and the director of the Center for Human Development at Beaumont.

Unfortunately, some parents find talking to someone who isn't going to talk back a bit silly and will refrain from engaging their child in conversation until they get older. A study recently released in the journal Pediatrics found that moms are almost three times more likely than dads to engage in baby talk.

So, what are the best ways to engage your child in "conversation," what should you avoid and how can you get dad involved? Dr. Hines chimes in with her top tips.

There is no need to have an hour-long discussion on the latest world scandal. Short sentences about what is going on throughout the day will work just fine.

"One thing I would do is keep it very simple and not constantly barrage them with words," Hines says.

She recommends parents talk to their kids about anything throughout the day – saying things like, "It's sunny outside" or "Mommy is washing the dishes."

Kids process language as they go along, Hines says, and even nonsense-talk can be beneficial. Just be sure to use words you want them to repeat later.

Sure, baby might not know that you shouldn't Hop on Pop, but that doesn't mean they aren't getting anything out of reading Dr. Seuss.

"Reading to your baby is also a part of baby talk," Dr. Hines says.

The American Academy of Pediatrics asked physicians to advise parents to read to their children daily. Find out why there has been such a big push for this.

In fact, there are tons of benefits that reading aloud can have for your baby outside of communication skills.

Kidshealth.org found that reading aloud can build listening and memory skills, give babies information and will even begin to teach them such concepts as color, numbers, letters and shapes.

As an added benefit, kids who are read to learn to speak their native language at the right time – and this will even strengthen the bond between parent and baby.

Give baby the chance to respond

"When they reach six months of age, they are starting to recognize pausing and that conversation has give and take," Hines says.

It's important to give your child a chance to respond with his or her own sounds. This way the baby continues to grow and understand how to carry on a conversation.

In today's highly tech-dependent society, it might be easy to put on Baby Einstein or another educational show and let baby be, but Hines and the American Academy of Pediatrics advise against using a tablet or television to take the place of actual baby talk.

"The interaction between the caregiver and child is what is important," Hines says. "TV or a screen is not a good substitute, because you don't get the interactive side."

Get on their level

As for dads that simply won't be silly, Hines recommends dads get down on the floor to coo with their baby.

"Roll around if you want to, play with the toys, be hands on and just talk to them while you are doing it," she says.

An article published by Boston.com responding to the Pediatrics study, supports dad in talking to his baby in his own way. He doesn't have to try to imitate mom or do everything that she does.

Simply find what works for you and keep doing it.