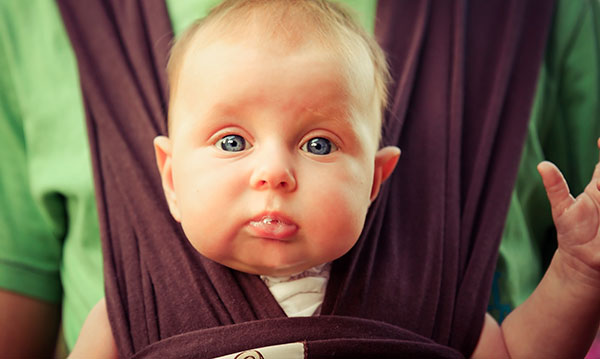 “Baby should be visible and kissable,” Pratt says. “This ensures that baby’s placement is not too low. Whoever is wearing the baby should be able to gently lean down and kiss the child.”

Other guidelines MOBY shares with baby wearers include ensuring baby’s chin is off of his or her chest.

“We say to use a two-finger width guideline,” Pratt notes. “This is to prevent suffocation.”

Pratt also says that the baby’s face should always be visible.

“This is so you can see that the baby’s airway is not obstructed,” she explains.

The American Academy of Pediatrics advocates baby wearing not only as a response to crying but to prevent a baby’s crying in the first place and to promote parent-infant attachment and the baby’s overall development.

According to a “benefits of baby wearing” guide MOBY shares with parents, baby wearing promotes interaction between the baby and the baby wearer, which can lead to early social development.

“It can lower stress and stabilize stress hormones,” Pratt notes. “It can help lower the incidence of postpartum depression. And it can boost mom’s milk production via the close contact with her baby.”

The American Society for Testing and Materials’ guidelines for wrap and sling baby carriers call for a minimum starting weight of eight pounds. Pratt recommends parents thoroughly read the instructions and guidelines for their carrier of choice as some baby carriers may have a different weight threshold, but she notes that even small newborns may benefit from being worn.

“We’ve been contacted by some hospital NICUs indicating they use MOBY wraps with patients to promote kangaroo care – chest-to-chest contact,” she notes.

The AAP advises parents to check with their baby’s care provider before using a carrier as some NICU graduates lack the muscle strength to keep their airways open in an unsupported position.

As for positioning in a carrier, Pratt notes that babies should be in the frog-like position.

“This is important,” Pratt says. “The baby’s knees should be higher than his or her bottom. This is the best ergonomic position for baby’s spinal development.”

Pratt notes that typically parents using a MOBY wrap wear their baby on their chest facing toward them but that the hip hold is also common.

“The baby is still facing you but sits on your hip with one of his or her legs in front of you and the other behind you,” she says.

In addition to health benefits, baby wearing offers convenience for the wearer.

“Parents or caregivers have their hands free and can easily do things and run errands,” she says. “You can go about your day without having to lug a big car seat or stroller around.”