Are You Setting Your Baby Up to Be an Emotional Eater?

You could be, according to one study's findings. A local pediatrician weighs in with things to do before feeding your fussy baby. 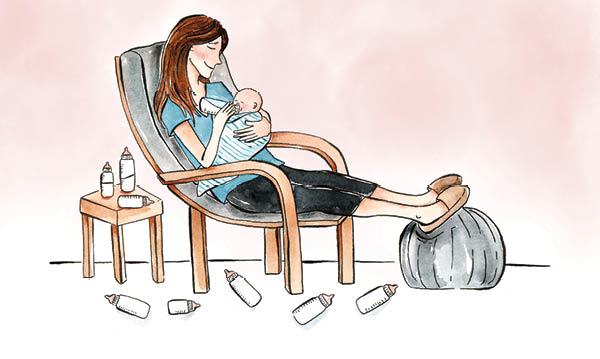 I can’t tell you how many times I heard those words from family members during the first few months of my son’s life. As a new parent, it’s not easy to decipher your baby’s cries. But when he’s sobbing two hours after he’s had his formula, I’ve had to stop and ask myself, “Is he really hungry?”

Nine times out of 10 he’s not, and, with a little patience, I can soothe him sans formula. But for many first-time parents who are unable to calm a screaming infant, reaching for the bottle – or breast – is the first step in finding relief.

By doing this, though, you could be setting your baby up to be an overweight, emotional eater later in life, says INSIGHT, short for Intervention Nurses Start Infants Growing on Healthy Trajectories, an ongoing study that began in 2011 – and whose 2016 findings recently resurfaced in The New York Times.

And childhood obesity remains a big problem. In fact, one in three American kids is overweight or obese, according to the American Heart Association, and suffering from health issues that traditionally did not occur until adulthood, including high blood pressure and Type 2 diabetes.

Dr. Sarah Laginess, a pediatrician at Beverly Hills Pediatrics – with locations in Bingham Farms and Sterling Heights – urges parents to avoid fixing problems with food, even early on.

“(Babies) start associating it with, ‘I feel bad. If I get food, I’ll feel better.'”

In the early weeks of life, it’s important for infants to gain weight, especially since they naturally lose a percentage of their birth weight in the first few days. Breast-fed babies typically eat every two hours, Laginess says, with bottle-fed babies going about three or four hours between feedings. In order to regain baby’s weight after that initial loss, Laginess suggests feeding him at least every three to four hours – even waking him for feedings.

While Laginess says parents should stop waking babies for feedings once they’ve reached birth weight, INSIGHT researchers have noted many doctors are “far less consistent in instructing parents when to stop this practice and how to identify and rely on infant hunger and satiety cues to guide feeding.”

The study, helmed by Penn State, attempted to help new parents identify hunger cues – and test whether this training impacts a child’s risk of obesity later in life.

During the process, 316 first-time mothers and their newborns were assigned to parenting groups and received information about four “behavior states” including sleeping, fussy, alert and calm, and drowsy. Parents learned different ways to read their babies’ signals – and alternative ways to calm kids, including swaddling and white noise. Babies of parents who received this training were less likely to be overweight when researchers checked back at age 1, Science Daily reported.

Since hunger isn’t the only reason your child is fussy, Laginess, who’s also a mom of three boys, suggests starting with other basic needs. “Is their diaper clean and dry? Do you think they are dressed properly for where you are?”

Address both of these issues before moving on.

Still fussy? Try the five S’s: swaddle him, put him on his side (or stomach if you’re supervising), swing him side to side in your arms, have him suck on a pacifier and make a shushing sound.

Noise can be comforting for babies, too. “Their soundtrack is mom’s heart or muffled sound from people talking,” Laginess says. Investing in a noise machine – like the Sleep Sheep by Cloud B – is another option for comforting baby. Laginess suggests one that continuously plays versus one that shuts off, because it might help lull baby back to sleep if he wakes up.

When you’re out and baby gets fussy, don’t worry – there’s an app for that. Try the Sleepmaker Rain app to help calm your little one. “That has come in handy at the grocery store and at Target,” she says.

If rain sounds aren’t cutting it, try music. Avoid tunes that are too loud, heavy or fast-paced and opt for soothing classical music, Laginess recommends.

Your child’s frustration could also be a case of over-stimulation.

“Some babies just need to be set down,” she says. “Maybe they just needed to be not touched for five minutes.”

It’s OK to put baby down in his crib or another safe spot for a few minutes and walk away – for your own sanity, too, when things get tough. “Parents need to realize they need to take care of themselves,” Laginess adds. Self-soothe so you’re able to continue to soothe your crying baby.

And if you’re lucky like I am to have your child’s grandparent on child care duty, make sure she (or your day care provider) follows your list of things to try, too, before soothing your sweetheart with mama’s milk.

Brought to you by Harbor Oaks Hospital
Read more
Advice

Active School Shootings: What You Should Know and Kids Should Do

How to Navigate the Holidays During COVID

With a little prep, masks and vaccines, you can safely celebrate the holidays during COVID.
Read more
Guides