Study Finds Nearly Half of Infants Have Flat Spots on Heads 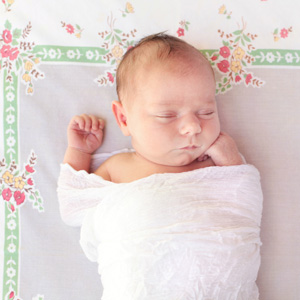 It's known that in order to prevent Sudden Infant Death Syndrome, it's important to sleep your baby on his back.

But according to a new study in Pediatrics, there could be a small consequence to doing so. Researchers found an increased number of infants have what's called "positional plagiocephaly," or a flatted spot on their head. This issue is caused from pressure on one area of the head for too long, Baby Center notes – and because babies have soft skulls, spending a lot of time in one position, such as on their backs, can cause the flat spots.

In a cohort study conducted in Calgary, Alberta in Canada, researchers found that about 47 percent of 7-12-month-olds had flat spots.

He adds, "In this day and age of car seats and infant carriers … and the fact that babies aren't getting all the tummy time we think they should get," little ones are winding up with flat spots because they simply spend more time with their heads pressed up against something.

There are a few things parents can do to prevent their baby's head from flattening out. "One of them is tummy time," Barone says. When children are old enough and while they're awake, "Spend some time with babies on the floor."

This also can help with their ability to roll over. "The sooner they can roll over, not only will that help with head positioning," he notes, but "then, if they learn to roll over sooner, they're going to be spending less time on the back of their head anyway."

Another tip is to get away "as much as we can" from anything that will "force baby to be on (the) back of the head," he says. When babies are positioned against a car seat, for example, they usually only look one way.

Same goes for the bedroom. Barone recommends repositioning the crib in the room sometimes so the baby isn't always positioning her head the same way to look at you, her toys or the light. Or lay baby at different ends of the crib.

Barone says positional plagiocephaly "normally is not serious," and "most kids will outgrow it."

"Their head still has to grow – so they're not always lying on their back forever." The head grows while they are awake, and it "will mold itself back over time," he says.

But, he notes, in some kids, "it can be severe." He says if the baby's head is flat around 4 to 6 months, she can be evaluated for a helmet to correct it. By 1 year old, though, the bones harden.

Before a helmet, he says, doctors might try neck muscle stretching and turning the baby's head, too. They'll also check to make sure the skull is growing correctly.

If left untreated, he says positional plagiocephaly can possibly make it difficult for a child to move her head around. "There is some effect on the jaw and mandible and the way it grows," he adds.

While many of these things are more rare, he says, "Those would be the things that we'd worry about a little more."