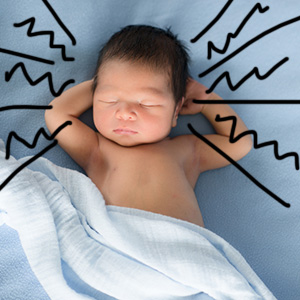 For some parents, masking the racket of everyday ruckus is a simpler task thanks to infant sleep machines. The white noise is enough to do the trick and lull baby into a deep sleep. But earlier this month, a study in Pediatrics looking at the sounds pressure levels of those trusty machines found that at max volume levels, they could be loud enough to damage baby's hearing.

What does the study say, exactly, and what should we take away from it?

What the study says

University of Toronto researchers wanted to know the maximum output levels of infant sleep machines, so they tested 14 machines at their highest volume setting at 30, 100 and 200 centimeters from the machine. The machines played 65 different sounds ranging from white noise, nature sounds and even heartbeat sounds, CNN reports.

According to the study abstract, the recommendation for noise limit for neonatal intensive care units at hospitals is a maximum of 50 decibels. Three of the machines tested were louder than 85 decibels, which is the limit for adults working an eight-hour shift, the New York Times notes.

While you may be heading for the trash bin with those machines in hand, don't ditch them just yet.

He points out that the study was done in a lab and is more of a "theoretical study," adding in order to prove that the machines would cause hearing damage, researchers would need to study thousands of babies and check them over time for hearing damage, as well as control for other factors like proving it was the machine that caused the hearing damage.

"By no means does this mean that your baby is going to have hearing damage or hearing loss from the machine," Mali says.

Although he does advise parents that if you turn the volume up all the way and attach the machine to the crib really close to your baby, "that might be a bit much." If you use the machine safely, meaning you set it a safe distance from baby and aren't cranking up the noise, "you're probably going to be just fine," he concludes.

The moral here? "Be careful of the headlines," Mali says.

"More research needs to be done if in fact it's shown that it's a problem," he notes. "It should not change anyone's practice."