What’s Up With Baby Spit-Up?

A local NICU parenting program coordinator weighs in on when baby spit up is normal – and when it's not. 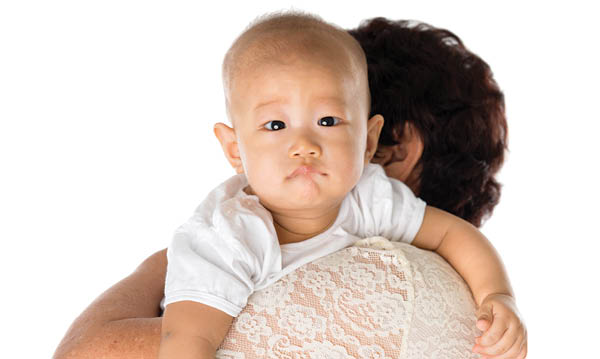 All babies spit up. Usually baby spit up is harmless, but there are instances that signal something else is going on. “Spitting up is very common in babies, especially during the first three months,” says Michelle Enerson, NICU parenting program coordinator at Beaumont Health System – Royal Oak. “As moms, we often overestimate how much our babies are spitting up.”

Babies spit up because the muscle that separates the esophagus and stomach isn’t mature or strong enough to keep the stomach contents down, Enerson says. By age 1, she notes, it mostly stops.

Sometimes, though, it’s the sign of something more serious – which Enerson experienced with her son. “He cried, spit up, refused feedings and seemed generally uncomfortable most of the time.” At her son’s 2-month check-up, his lack of weight gain concerned his doctor. The culprit? Acid reflux. With medication and some modifications, Enerson’s son was a happy and thriving baby.

Signs to watch for

“Spitting up usually happens with a wet burp. It’s an easy flow where the baby isn’t upset. Projectile vomit will be forceful and often comes out of the nose as well. The baby will also be fussier.” Vomiting can be a signal of a problem – and can lead to other complications, including dehydration.

“If a baby isn’t gaining weight, spits up forcefully, has abnormally colored spit-up, refuses feeding or has trouble breathing because they are spitting up so much,” Enerson says, “it’s time to see a doctor.” To be sure, schedule a weight check with a nurse at the pediatrician’s office. Many offices make nurses available to check the baby’s weight to verify steady growth.

“If a baby is spitting up a lot but is still gaining weight, it’s harmless.”

Enerson says parents with concerns should discuss them with their doctor.