Chop and prop your own holiday tree with these seven tips from Michigan experts. Plus, learn how to take care of real Christmas trees once they're set up. 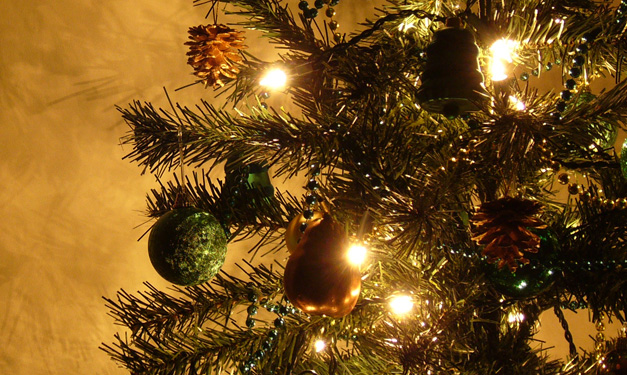 Shouts of “Tim-berrr!” echo merrily around the Candy Cane Christmas Tree Farm in Oxford this time of year. “It’s a wonderful family spirit,” says Cathy Genovese, who co-owns this 18-acre magnet with her husband Frank. But there’s a bit more involved here than apple- or pumpkin-picking. Scroll on for advice on chopping and propping your family’s live tree before and after you head to a local Christmas tree farm.

1. Picture it. Big and bushy? Or slender and small? Influences can range from volume of ornaments to budget to personal taste. Have an idea – and get your kids on board – in advance.

2. Measure up. “Trees always appear smaller under the sky than they do in someone’s home,” Genovese says. Before arriving, “know the size of the ceiling, and subtract about a foot.” A quick trick: Raise your arm to the ceiling, noting the size of the gap. Mind the room width, too. Use both as your on-the-scene litmus.

3. Prime picking. While live trees are typically in great health, look for greenness, and make sure branches bend and don’t break. Some brown needles are normal, says Marsha Gray of the Michigan Christmas Tree Association. Run a branch through your fingers: “If green needles are coming away – a lot of them – that means the tree is too dry,” she says. “I wouldn’t even buy it.”

4. Making the cut. Don’t fret about supplies. Places like Candy Cane provide bow saws and wagons for hauling trees. Wondering how to cut a Christmas tree down? Typically, an adult or older teen makes the cut at ground level (so consider bringing some protection for those knees). “It really, really helps if somebody leans on the tree in the same direction,” Genovese says. “That makes it go down easier” – plus prevents the blade from pinching.

5. Shake and pin. Many farms pop your cut tree on a “shaker” machine, which knocks off all the loose needles and debris. They’ll also prep it for a “spike stand”: A heavy-duty base with a four-inch-tall spike in the center, which can start around $30. A special machine drills a slim, four-inch deep hole into the base of the trunk. Once you’re home, just pop the tree onto the spike, and it’s instantly centered.

6. Hitch it up. The cost of your cut tree typically includes wrapping, too. Extra twine’s supplied to secure it to your car’s roof, if need be; Candy Cane has staff in the parking lot to offer help. “We want everybody to get home safely,” Genovese says. If it fits into the back of the vehicle, all the better: “You get that Christmas smell all the way home.”

7. Water – quick! When it comes to watering a Christmas tree that’s freshly cut, you’ll want to get it in water within four to five hours. Be sure to at least get that trunk into a bucket of water, adds Gray. Too much longer, and the cut will start to seal back up. Careful not to “bruise” it or get it dirty, either.