Most pediatricians don't broach this topic, a recent survey says, but many parents are open to the conversation. So – what should families know and do? 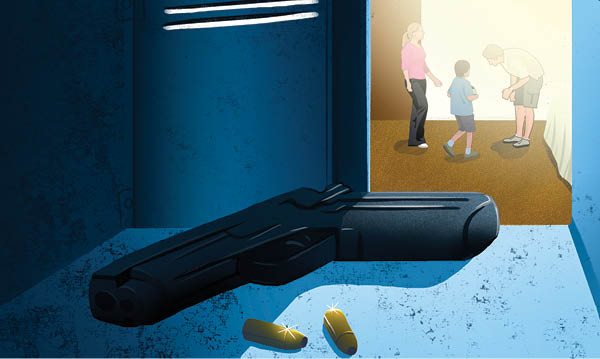 During child well visits, pediatricians address illness prevention, developmental milestones and any concerns parents have. But what if your kid’s pediatrician added gun safety to the list of topics – would you be open to that talk?

In a recent survey of more than 1,300 parents, 66 percent felt their child’s doc should ask if there are firearms in the family home, while 75 percent thought pediatricians should discuss safe storage of guns, according to a new study in The Journal of Pediatrics. It also noted more than one-third of children live in homes with guns and another 14 percent visit homes of gun owners often.

Here in Michigan, an estimated 29 percent of adults own a gun, according to July 2015 data from Injury Prevention Journal, as reported by MLive.

There’s no way of knowing how many guns are safely stored in houses, but one thing is certain: Those that aren’t can lead to disaster.

“Every year, nearly 1,500 children die from guns and many more are seriously injured,” notes a gun safety web post by Nationwide Children’s Hospital.

It’s something Oakland County commissioner Bill Dwyer has witnessed in his 49-year career with police departments in Detroit, Farmington Hills and Warren.

“I’ve seen the tragedies,” Dwyer says, “and so many of them can be avoided.”

Parents talk to kids about fire safety. As they get older, it’s sex, drugs and alcohol. But what about guns? If your pediatrician doesn’t bring it up, you can certainly ask. But it’s ultimately a conversation for you to have with your kids – and early, Dwyer says.

“I firmly believe that you should start talking to these toddlers at the age of 2 and 3,” he says, “and then reinforcing the danger involved.”

A child as young as 3 has the strength to pull a trigger, notes children’s health nonprofit Nemours on its site kidshealth.org – even 2-year-olds, in several recent cases. Spelling out differences between real and toy guns, if you allow your kids to play with them, is important, along with talking about pretend gun violence on TV or in movies or video games.

Royal Oak Police Department Lt. Keith Spencer feels it’s up to each family to choose the age and time to talk, but he reminds parents to keep things age-appropriate. See what questions your child has, too.

Also, communicate with other parents. “You can lock down your own home,” he adds, “but your children are going to visit friends and family.”

Don’t be shy about asking other parents if they have a gun or guns in their home and how they are stored before your child goes over to play. It may feel awkward, but it’s natural. You’re concerned about your child’s safety.

Another key point: If kids do come into contact with one, Nemours notes, tell them to stop what they’re doing, don’t touch it, leave the area and tell an adult.

After all, according to the new study in The Journal of Pediatrics, “Counter to parents’ predictions, 75 percent of children under 10 years of age knew where household firearms were stored” – and, of those kids, a third had secretly handled the gun.

It all comes down to correct and careful storage. “The proper way to store a gun would be to make sure it’s always unloaded,” Spencer says, and “that it’s locked in a location or in a home safe or in an area that is not accessible to your children.”

It seems so simple. But so is forgetting. “Because of the carelessness, we’re losing toddlers,” Dwyer says. And there’s no excuse. “I believe strongly in gun safety locks. Putting a simple gun safety lock on a weapon is going to save lives.”

Free locks are available at most police departments, Dwyer adds – including Royal Oak, confirms Spencer – at the front desk or records department. These steel cables thread through an unloaded gun’s “action” (the part that loads/fires/ejects a cartridge) and snap close with a key-secured padlock. They fit most types of pistols, revolvers, shotguns and rifles, notes projectchildsafe.org.

Vaults or safes are another option for multiple firearms, Dwyer says. They’re available at places like Home Depot, Cabela’s and sporting goods stores.

When it comes to cleaning guns, never leave the weapon unattended, Spencer says, and store the cleaning equipment out of reach, too, just like other chemicals in the home.