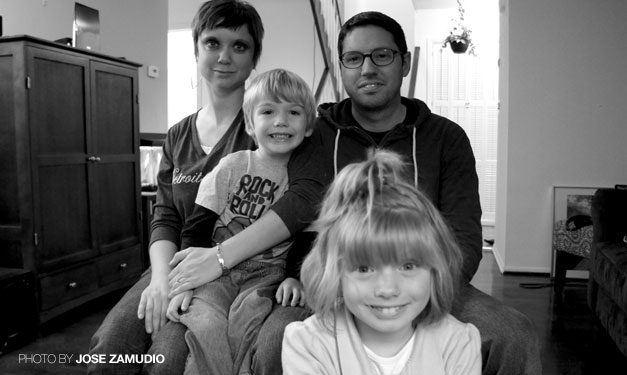 Shannon and Joseph Mackie’s adoption story is unusual. For one, the Detroit couple, while still in their 20s, decided to adopt not as a last-resort to parenthood but as their primary path. They also bucked the norm by opting to adopt older children – siblings who where 15 months and 4 years old when they adopted them – instead of adopting a child in infancy.

“We had decided that we were able to love a child, or children, that are already here,” says Shannon Mackie.

And “decided” is the operative word, Mackie says.

For people who have biological children, or have adopted their children as infants, the process of feeling like a parent is pretty straightforward: You’re handed a little squirming bundle, and some powerful hormones start kicking in that help create that feeling of intense love and close bonding that any parent feels for their child.

But when parents choose to adopt older children, that process is different – for both the parent and the child. Instead of a helpless infant, parents need to get to know and love an older child who can walk and talk, has opinions and is most likely dealing with the effects of the trauma in her life that led to her being available for adoption.

And the children are learning to adapt to a new household, new rules – and a whole new parent. For them, “mom” and “dad” aren’t concepts that bring the same sense of security that a child from a more functional family would have – instead, something happened that led to the severing of their relationship with their first parents.

Adoptive families and adoption experts say that while adopting an older child has its challenges, it’s also a wonderful way to form a family. Yes, these families are different in how they began, but they can have the same close connection as any other family. Yes, older children available for adoption may have had a difficult past – but they are just children, who need love, stability and a place to call home.

The need for adoptive families is great. At any given time, there are about 3,000 children waiting for adoption in Michigan. Children with disabilities, African-American children and kids over age 9 are the hardest to place; sibling groups are also harder.

The Judson Center in Royal Oak coordinates the Michigan Adoption Resource Exchange, or MARE, which acts as a central repository for information about waiting children in the state. Prospective parents can go to MARE’s website and view photos, read a little about each child listed, and learn about what impairments kids might have. Those can be as simple as a mild learning disability or as complicated as multiple physical and mental impairments.

A common misperception is that adopting a child from the foster care system requires that parents be well-off, live in a large home or be married.

“We’re looking for regular, real people on all ends of the spectrum who are willing to provide a home for kids,” says Maggie Vink, who worked as an adoption navigator for MARE – and an adoptive mother herself. “It’s all right if you’re in an apartment. If you can provide a safe, loving home for a child, that’s what we’re looking for.”

Starts with a home study

Prospective parents start by choosing an agency and then arranging for a home study. This is an intensive process that requires gathering a great deal of paperwork, sometimes paying fees and submitting to lengthy and probing interviews. It can take as long as six months. Typically, a home study includes the following:

When that process is completed, they can browse MARE for children they might like to meet – and their social worker will also be looking for matches for them.

“These children have experienced a lot of disappointment in their lives,” says Vink. “The pace is all based on what that child’s needs are. It depends on that particular child how slowly or quickly it needs to go for them.”

Shannon Mackie says that she and her husband were often frustrated with their agency and with the slow pace of the process, but she realized the process is not for the prospective parents’ benefit. “It was frustrating waiting to get the home study scheduled or get emails returned, but we realized they are not doing (their job) for us; they’re doing it for the kids.”

In Vink’s experience, that matching process took about 10 months and involved a lot of soul-searching and heartache. She was considered as a match for several children before being matched with her son, and also was presented with several potential matches she rejected for one reason or another.

While it might seem that hearing they are going to be adopted would be a dream come true for a waiting child, it’s actually pretty frightening to a young person who’s not had a lot of permanence in his or her life, Vink says.

Among other things, it means adjusting to yet another home after being removed from their birth family – and then going to at least one foster home. The prospect of yet another uprooting can have some very difficult emotions associated with it for children who have experienced trauma.

Prospective parents need to be ready for the adjustment process their children will likely go through once they have been adopted, as well. Often kids progress from a honeymoon period, where they are on their best behavior so their new family won’t reject them, to a settling-in phase where children will try to push their boundaries.

Also, children who have attachment issues often try to sabotage relationships with their new families, because they’re sure these people are going to fail them as so many others have – and it gives them a sense of control over the outcome, even if it’s negative.

“You have to be ready to help a child feel loved, even when that child is behaving in sometimes ugly ways,” Vink says. “You have to show them, ‘I’m here for you, no matter what.'”

It’s important that adoptive parents are accepting of whatever happened to their kids in their earlier lives. “They’re just kids, and nothing that happened to them was their fault,” Vink says. “Part of adopting an older child is welcoming their history – even the not-pretty parts.” Like all kids, adopted kids need unconditional love and acceptance, and that includes the ability to be open about the reasons their parental rights were terminated.

MARE offers support to families before and after the adoption, including support groups for parents. The Judson Center’s adoption navigators program pairs experienced adoptive parents with people new to the process and helps guide prospective parents through every step of forming their new family.

Vink’s own story reflects the joys and challenges of adopting an older child. She pursued adoption as a single person, because her 30th birthday was fast approaching and she wasn’t married. She knew she wanted children and felt she would be a good mother, so she decided to pursue an international adoption of a young child. After a placement with an 8-year-old boy from Russia fell through, she realized she could do well with an older child and decided to adopt in Michigan. Her son, who she adopted, was age 10.

Like many adoptive parents, she says it took time over a period of months for that relationship with her son to grow. “I called the social worker in tears – I felt so worried about not feeling this instant gush of love for that child,” she says. She says her worker helped her understand that love takes time to grow in any relationship, and even people who give birth to their children don’t always bond right away.

That was the case for the Mackies, too.

Getting to know their children and help shape them wasn’t always easy. Their daughter, Mackie found, had a penchant for late-night tantrums. Both kids were also used to eating fast food and junk food, and coaxing them into trying more nutritious options was an exercise in patience.

“When it comes to appropriate behavior, we learned that for some children, especially our daughter, sticker charts are a better motivator than scolding,” Mackie says.

They’ve had some bumps along the road and benefited greatly from seeing a family therapist, Mackie says – yet becoming a family has been rewarding, and she feels like she is providing her kids with the love they need to reach their potential.

“They will feel secure and safe and loved, and that will help them be more confident and more themselves – and more conscious of themselves,” Mackie says.

Unlike many families who adopted children who were in the foster care system, the Mackies have a degree of openness with their children’s biological family, something they consider important in their children’s life. “I can’t imagine what it would be like to not have anyone to be related to,” she says.

They see the children’s biological aunt monthly; while the relationship is very good now, at first there was some wariness, Mackie says. They also have cousins they have a relationship with, and Mackie is negotiating having the children meet their teenage half-brother in the New Year.

“I don’t feel threatened by it. I feel like there is enough love for everybody – they can love us and them equally.”

Becoming a parent, and becoming one through adoption, has had a huge effect on her personally, Mackie says. Understanding why she parents her children a certain way or why certain behaviors challenge her has allowed her to examine her own issues and begin to resolve them.

“I know myself better and I have become a better person because of them,” she says. “It’s true no matter what kind of relationship you’re in, but when you choose to have that intimate relationship with someone, it changes you.”