Adopting a Vegan Diet as a Family

A vegan diet can be a healthy alternative for some families. Find out how a local dietitian recommends families adopt the lifestyle and how to do it responsibly. 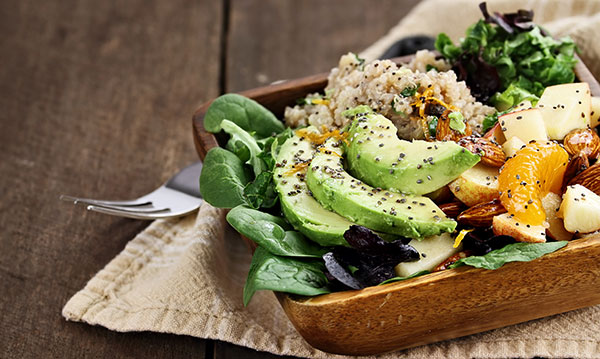 Are you looking for a way to put your family on a healthier track? A vegan diet can reduce the risk of cardiovascular issues, is an anti-inflammatory way of eating and is much more animal-friendly, but it also takes a lot more work than a traditional diet and could open you up to scrutiny from family and friends.

But if you think that it’s the right choice for you and your family, and if you’re ready to handle all that comes along with it, Julie Feldman, a registered dietitian in Bloomfield Hills, offers some insight on how to do it in a healthy way and tips on how to get your family on board.

Know what you’re getting into

The first step to making the leap into veganism is to do some research and understand what comes along with being vegan.

“I’m a firm believer that knowledge is power so for a family wanting to make this decision, get educated about the pros and cons. Being vegan takes a lot of planning and hard work,” Feldman says.

A person on a vegan diet must be aware of where they are getting important nutrients like protein, calcium and vitamins D and B12, which would normally come from animal products.

“You can’t just run up to the Coney Island and grab a dinner,” she says. “You have to be thoughtful.”

You must also be able to read what your body is telling you and be able to recognize issues that may creep up.

“If your child is reporting symptoms like a lack of energy or that they aren’t playing as well at their chosen sports, (these) could be signs of deficiency,” Feldman explains. “If you’re vegan, you need to pay attention to how you’re feeling and make adjustments accordingly.”

Once you have done your research and understand what being vegan really means, Feldman recommends taking things slow with your family.

“Enforcing major food guidelines on children can cause a lot of issues surrounding food,” she says. “My best advice is that (if) the parents in the house want to be vegan that they lead as an example.”

You can also try a recipe swap, where kids pick their favorite animal-based meal and go online to try to find a vegan recipe to replace the meal and even get the kids involved in the food-making process by bringing them to the farmers market with you or by signing up for a Door to Door Organics meal kit delivery service.

“The more the kids participate in the planning, shopping and preparing the meal the more likely they are to eat the meal,” she says.

Still, Feldman stresses taking the feelings of the child into consideration before making such a leap.

“With any dietary change, I really do believe that kids deserve to understand the reason why and that they also get to make their own decisions,” Feldman says.

She adds being vegan might make a child more socially isolated because they can’t eat dinner at a friend’s house or go to other social gatherings.

It also makes it difficult for them to go out to dinner because they have to check ahead to ensure they’ll have something to eat.

“(These) things need to be taken into account,” she says.

While Feldman says it is absolutely possible to sustain oneself on a vegan diet, it’s also really easy to lose variety and get everything you need from a few sources – something she says should be avoided.

“You need to pay attention and get a variety of sources. I wouldn’t recommend getting all of the protein for soy-based products – we don’t want too much soy in our diet,” she says.

And other things may need to be supplemented.

“Certain things … like Omega 3s can be found in black bean and walnuts (but) you can get Omega 3s from an algae supplement,” she says. “Supplementing for things that you know are not going to be met on a daily basis is important.”

Of course, the choice whether or not to adopt a vegan diet as a family comes down to what is right for your family. Being vegan has its benefits but sometimes it just doesn’t quite fit your needs, Feldman says.

“Being vegan is good for heart health but if it creates stress for the family it’s not accomplishing the goal,” she says.

You can make it easier by hiring a registered dietitian to help create a three-week rotating meal plan, but if you still can’t make it work, she suggests adding three or so vegan dinners a week or slowly substituting animal-based products with plant-based ones.

“Eating doesn’t have to be black and white,” she adds.

And if you’re still not sold, consider a vegetarian diet instead.