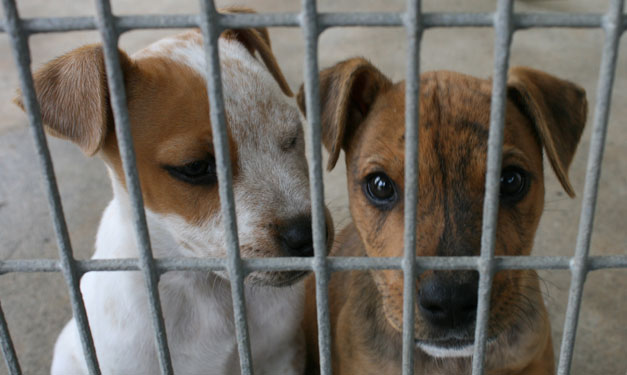 If your kids are begging for a furry addition to the family, why not consider adopting a dog or cat? Many stray animals are in need of a loving home, and lots of local groups are dedicated to rescuing and helping them. But remember: It’s a big commitment, too! So we asked four local families from Oakland and Wayne counties to share their adoption “tails” – how they decided where to go, and what you should know before you decide to provide a home for pet. Get their insights and read their stories right here!

About the people: Jennifer Jasgur with husband Steve and daughters Baila, 4 and Simone, 2. They live in West Bloomfield with Sophie (a 3-year-old puggle), Solo (a Feist mix) and Kitty Witty (a 2-year-old cat).

Why she rescues: “Growing up, my mother rescued dogs, and I suppose I followed along, liking the idea of ‘saving an animal’s life.’ I’ve had great experiences and bad ones – I have rescued six dogs and one cat. The bad experiences resulted in aggressiveness.”

What she’s learned: “Kill shelters kill too often, and no-kill shelters often adopt dogs that are aggressive, haven’t been socialized and will be returned to the shelter over and over again; it’s a vicious cycle. If the children are young, don’t leave them alone around the dog until you are sure there aren’t any issues. Teach your kids to pet gently and not pull ears or tails. Leave the dog alone when eating and chewing bones.”

Her advice: “An animal is an animal. They require proper training, care and love. It’s important to research the breed, even if it’s a mix. There are often behavioral issues that come along with an animal.”

Why she rescues: “Many animals who are rescued have been through traumatic experiences and need people in their lives who will give them solid, loving homes. Before I adopted Ellie, I thought long about the impact of having her in my life and in my home. Ellie was abandoned – left by the side of the road by her original owner. A young boy found her and her sisters and delivered them to his mother; they were severely malnourished, dehydrated and in poor condition.”

What she’s learned: “People have to be very serious about making a strong commitment to adopting. I had much enthusiasm for the energy and effort it would require to take care of daily needs, giving a lot of love and affection. I took into consideration the financial aspects of this new furry family member and needing people to care for her when I travel for work.”

About the person: Lisa Rutledge of Taylor has been rescuing rabbits for two decades. She used to foster them. Currently, she lives with Hanna, a brown mini lop who came from and Jake, a white rabbit with red eyes. Both came from the Midwest Rabbit Rescue in Plymouth.

Why she rescues: “I rescued my first rabbit by chance. Many rabbits end up in shelters, where they usually get put down quickly as they are hard to place. Some very unthinking people let unwanted rabbits out into the wild, thinking they can manage. That is a horrible fate for a domestic rabbit, who often gets killed in no time.”

What she’s learned: “Many people think rabbits are starter pets for kids that don’t need a lot of attention. They are impulse buys at Easter, since baby bunnies are so cute. Bunnies who don’t get a lot of attention are bored and get mean. They need toys, love, interaction with humans, space – and never should be kept outside in a hutch.” Bunnies from a rescue shelter have been health screened and spayed or neutered; they cost around $70 each.

Her advice: “Bunnies are great pets. They live eight to 12 years. Some are cuddly but most don’t like to be held. They should be allowed to run around the house – they’re inquisitive! They are easily litter-trained and don’t smell if you use proper bedding. They’re best in male-female pairs – fixed, of course, as they multiply quickly. Families who want a rabbit need to make sure the adults want one. They need to be fed once or twice a day, have water at all times, and litter boxes need to be cleaned every few days.”

About the person: Bobbie Lewis, Oak Park resident, with border collie Mona, age 8, who was adopted in September of 2004

Why she rescues: “We’ve had three dogs, all adopted as adults. Dogs are wonderful companions. Our kids grew up with two earlier dogs and loved them. Now that we’re empty-nesters, the dog is great company.”

What she’s learned: “They are a lot of work – especially puppies that have to be trained. Even the best-behaved pets need to be fed, walked, groomed, sometimes trained and taken to the vet for checkups and vaccinations. It’s expensive to have a pet. (The Lewises spend $350 a year on veterinarian insurance, which mostly covers vet bills.) Pets are messy. Even the best have occasional accidents – and cleaning up doggy diarrhea or vomit is no fun.”

Her advice: “You really don’t know what you’re getting. The shelter folks let you take the dog out and walk it around, but that doesn’t really tell you much about its behavior and personality. You can get a few clues from its history with the shelter. Our dog had been there just a couple of months, and she was in good shape when they got her – they figured she must have been a well-treated pet that got lost.”