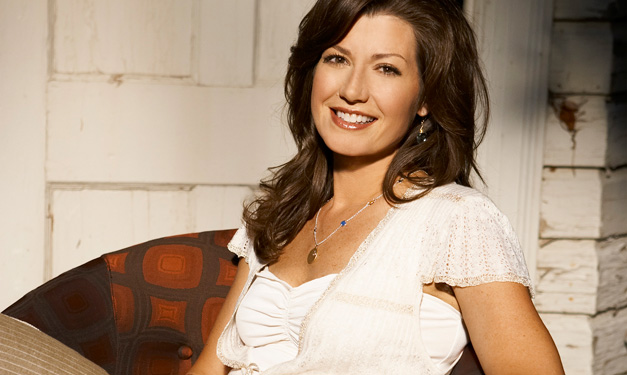 One of Amy Grant‘s career highlights as a gospel-pop musician was a duet with country superstar Vince Gill. That duet – “House of Love,” an adult-contempo crossover hit that followed inescapable early-’90s songs like “Baby Baby” and “Every Heartbeat” – would extend outside of music. The two married in 2000, combining Grant’s three children and Gill’s daughter. And, together, they had a girl of their own, Corinna.

The family lives in Nashville, where they recently installed a home studio (Grant has recorded five new tunes for a retrospective album due in March), and that “house of love” is now a way of life. But it took time and work to get there, Grant told MetroParent.com prior to two concerts in southeast Michigan in early 2010.

Grant spoke to us about blending families, passing her morals onto her kids and how she’s basically just another mom.

What do – or don’t – you miss about touring with young children?

What’s great about it is everybody’s proximity to each other all the time. You go from a bus to a hotel room to a backstage. And the most fun thing – especially on that tour, because we were mostly in arenas and big places – was riding toys. Nobody has access to that kind of smooth concrete!

What I don’t miss is transferring into the hotel room at 3 o’clock in the morning; that’s always hard. And at that point I had three kids. You don’t want some stranger carrying them.

Do you still bring the kids on tour?

They’re older, so it’s really difficult. The last show I did was with the symphony in Birmingham, Ala., and I actually had two of them with me. My “I do” daughter, Jenny Gill, went and sang all the background parts. Sarah is 17 and, for her birthday, I had an orchestration written for a Mindy Smith song that she loves called “One Moment More,” and she sang that.

We have a tour on the books for next Christmas, and I would love for Jenny and Sarah and maybe Corinna to come and participate. Millie doesn’t really like to be on stage, and she’s 20. And Matt’s 22. I think the idea of having to be that restricted would send them to the nuthouse!

When you’re on the road by yourself, how do you stay in contact with the kids – since most children don’t actually talk on phones anymore?

The same way I do at home: a lot of texting!

You’ve always struck me as a humble, DIY mom – even when you were playing big arenas. Is your life much more glamorous?

If glamorous is how you dress, then I’m not. If it’s how you spend your time, I guess I’m not either. I really am a homebody. I love being home. My daughters are the exact same way.

As a mom and a person of faith, has it been difficult to pass your morals onto your kids – especially in the spotlight?

Kids emulate their family of origin whether they want to or not. A child of a screamer will probably grow up to be a screamer. … (But) it’s a tough lesson when you’ve come from affluence to understand the value of the dollar. I’ve probably been so much stricter on my kids just because of that.

You’ve said the kids were unhappy in the beginning of your marriage to Vince. Like most blended families, adjusting can be challenging. What advice would you give other parents?

The most important thing is to realize that a blended family is the decision of the parents and not the children. And so the best way to be respectful is to let the kids come around in their own time. Another thing: When I had a baby with Vince, I got this advice from another woman who was from a blended family – she said it’s kind of different with a half-brother or half-sister, that you should always offer to pay babysitting. I thought that was great advice. Just practical.

If you’re asking for (your children) to respect your choices, then you also have to respect where they are. That’s just a good key to navigate those waters. Also – as little posturing as possible. It’s OK to have several years of awkwardness!

How have your kids influenced your music palette? Are you finding yourself listening to Miley Cyrus and Lady Gaga?

Yeah – as a matter of fact, those are some of Corinna’s favorites. Oh my goodness – I just can’t keep up with all of it. They just all have a huge appetite for music.