Anchors of the Family: Sandra Ali and Shawn Ley

Meet news anchors Sandra Ali and Shawn Ley, Local 4 sweethearts with a family about to expand by two. 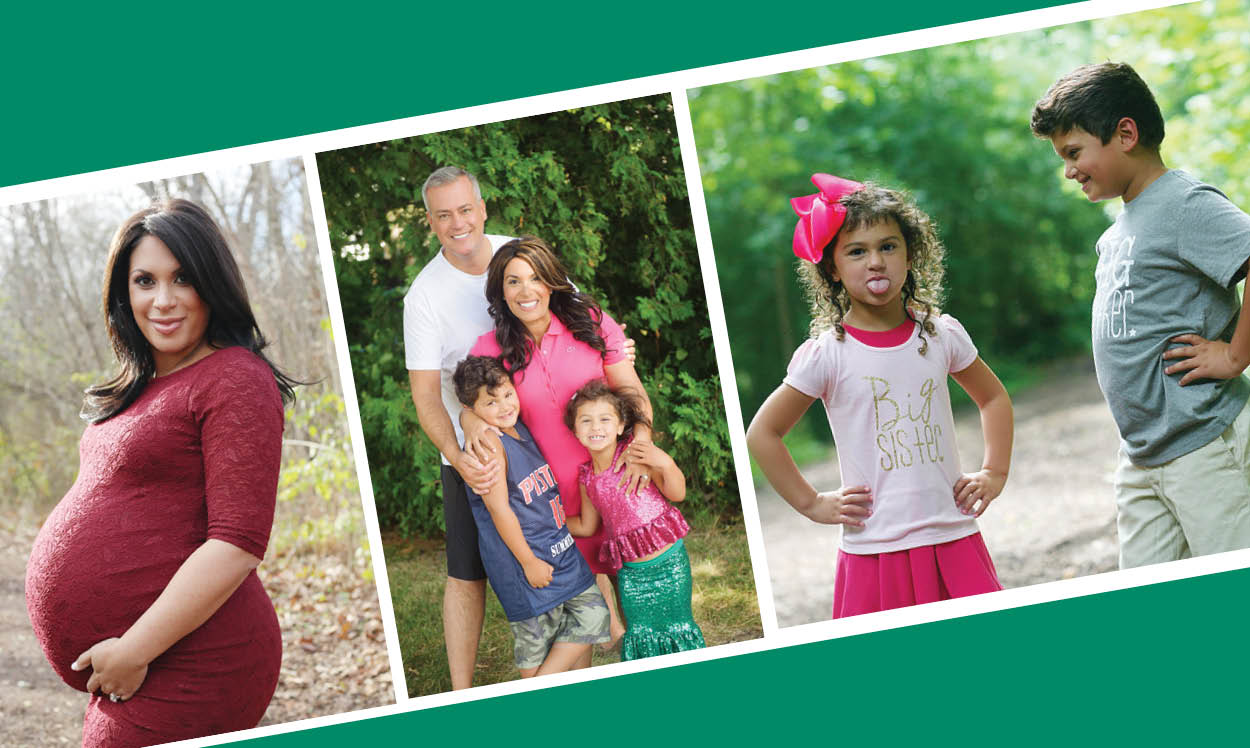 Finding a balance between competing work schedules and raising two young kids is a challenge many parents face. Now imagine doing it when even on your most frazzled days, you’ll be live on air.

That’s just the case for husband-and-wife team Shawn Ley and Sandra Ali, both Detroit TV news anchors at WDIV Channel 4 and parents to Roman and Isla, ages 7 and 4 at the time of this interview.

Busy mornings at this Oakland County couple’s house have Ley sneaking out in the wee hours for his 3:30 a.m. start and Ali scrambling to get everyone to school on time. Oh, and they had twins boys, Tamer and Grant, in early 2017.

“There are some mornings where I’m like, ‘Am I on Candid Camera?’ – everything is backfiring trying to get two kids off to school and dressed,” Ali laughs. “I feel like there are a lot of mornings where I show up to one or both schools completely like a mess. There are days where I think that I have it all together … and I realize that I don’t have my daughter’s lunch, or I don’t have her nap bag or I’ve forgotten her hat and her gloves.”

Sounds familiar, right? Like all of us, “You try to do as best you can,” she says.

Ley describes how he and Ali met as “one wild story” that – as unlikely as it plays out – is all true. It started when he had just moved to Detroit from Cincinnati and tuned into the evening news.

“Sandra was anchoring and I turned off the news, telling myself I could not be distracted by suddenly seeing my ‘dream girl!'” he says.

Soon he ran into her while covering a story on Detroit’s east side and found out she was about to move for a main anchor job in – of all places – Cincinnati. “I tell her all the places I loved to go in that great city,” Ley says. “Next thing I know, I’m reading a front page piece on Sandra in the Cincinnati paper and she is highlighting all of her favorite spots around town – mine!” he says. “A year later I take a job at a TV station across from hers in Cincinnati. I go look at a house for sale. It’s hers. Crazy.”

Despite what looked like destiny, a misunderstanding led to him standing Ali up on their would-be first date. They did finally go out and “we’ve been together ever since.”

“Managing schedules and juggling is one of the biggest challenges. I think it is for any working family,” says Ali, who was born in New York City but spent part of her childhood in Egypt. “I’m a scheduler and I’m a planner and so I tend to plan everything out down to the hour, the minutes – the who’s dropping who off where, who has which activity.”

Opposite schedules let Ali and Ley be the hands-on parents they love to be, handling all the school pickups and drop-offs and being there for the kids’ extracurriculars.

While she’s the “office of management and budget,” he’s probably the “social coordinator and chief entertainer,” he adds.

“We both came from backgrounds with our parents who had very strong work ethics. We do the same, albeit in very different careers,” Ley explains over the phone one afternoon on his way to Costco after filing seven reports about a homicide in Detroit. “We explain to our kids very bluntly why we work where we do and why we do it. And mix into that as much fun as we can possibly can.”

Aside from a friend asking about their “famous” parents, Roman and Isla are mostly unfazed by mom and dad’s cool careers – even when it means getting picked up from school in the news van.

“On the news it’d be Sandra anchoring, she would be tossing to me to give my report but our son got sick at school,” Ley explains. “I ended up taking my photographer and our news van to school, getting my son buckled in the back and feeling better and did the live report.”

The kids have spent lots of time at the station and, while seeing mom or dad on TV is momentarily exciting, he says, “my daughter would probably rather watch Elena of Avalor.”

And now that the twins have arrived, they’re busier than ever.

“People will always say, ‘You guys are always out and about!’ and we are,” Ali says. “When Shawn and I are not working, 99.9 percent of the time we’re with our kids and we’re having fun.”

Summers are spent at the pool and riding bikes, they love visiting orchards in the fall and sports games in the city are another frequent outing. Then there’s baking, crafts and Friday movie nights with sleeping bags and popcorn in the family room.

“We try to establish as many family traditions as possible,” Ali says.

Ley’s 20-year career in journalism was a dream of his from an early age, but he’s discovered a bigger dream.

“I told people that I thought at age 4 I knew I’d be a journalist and I thought that’s what I truly wanted to do, and that’s what I enjoy – but I never knew that I truly was here to be a father. That’s the most important thing in the world to me,” he says. “We’re so crazy about Roman and Isla and we want to show them everything the world has to offer.”

Ali agrees. “It is the toughest job but it’s also the most rewarding, and I absolutely love it. I don’t want to miss out on anything with them.”

See them on Local 4

Shawn Ley anchors weekend mornings and reports on weekdays starting at 5 p.m. Sandra Ali is on weekend and weekday evenings – typically at 5, 6 and 11 p.m. Follow Ali on Instagram to keep up with their fam.