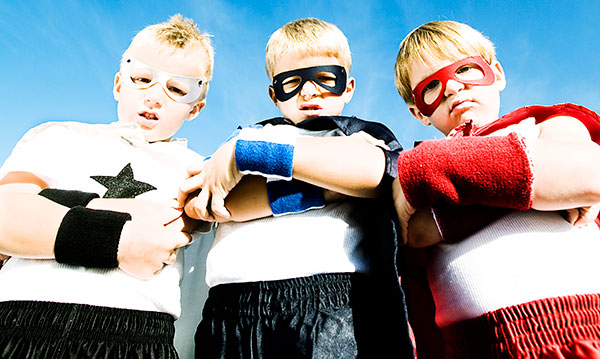 Superheroes are as American as apple pie, baseball and those two Starbucks locations directly across the street from one another. It’s no surprise that superhero culture runs deep. The Avengers made $600 million in box office sales alone, and the profits generated from hero-themed costumes, clothes and toys total well over a billion dollars.

But a recent study of 240 kids found they might actually have a negative influence on kids.

For this study, which was published in the Journal of Abnormal Child Psychology in January 2017, parents filled out questionnaires related to the amount of superhero media the child consumed and rate their child’s aggressive and defending behaviors.

Authors found that a preschooler’s engagement with superheroes was related to increased aggression one year later. In addition, they examined the effects of media on defending behavior, which includes behaviors intended to support or comfort a victim of bullying. They found no increase in these positive behaviors by children who engaged with superheroes.

Ty Partridge, associate professor in the psychology department at Wayne State University with a focus on developmental psychology, says that despite these findings, superheroes can be a powerful tool in engaging with children to form good social behavior.

“It’s a good way to talk to your kids, but it’s about parental engagement,” he says. “Having your kids watch X-Men alone is not going to make them upstanding people. It’s watching those characters and talking to them and really engaging them. It’s drawing those defender behaviors out.”

Partridge also says younger children don’t have the cognitive ability to understand the complexity behind some of the superhero storylines and characters.

“The other thing is that a lot of the superhero characters in the stories, particularly Marvel, which is popular in the comic series, are a bit flawed,” he adds. “They struggle with their responsibilities and they see having superpowers as a double edged sword. It’s not as clear cut as 1950s Superman – it’s not as black and white.”

In short, kids might not be picking up on the positive behaviors of the heroes because they’re too complex.

It’s not all bad

Dad of two Michael Werner, owner of Mike’s Comics and Games located in downtown New Baltimore, says that his 5-year-old son is interested in superhero media and he hasn’t encountered negative effects.

“My son is not a fan of the comic books, but he likes the superhero characters. He’s a bossy child,” he laughs, “but he’s not aggressive.”

“Remember watching Tom and Jerry when you were a kid? It’s just the same thing presented in new ways,” Werner says. “Superhero culture is all around and there’s been comic books for over 70 years. All this stuff has been around forever.”

That’s not to say all superhero media is negative. Werner says some superhero related media can do some good.

“I’ve seen more evidence of children who do enjoy comic books and that helping them to learn to read,” he says.

While Partridge says he considers the study well done, there were certain limitations. Parents reporting children’s behavior is less reliable than other forms of reporting, like teacher reporting or when researchers put children into situations to observe their behavioral response firsthand.

Partridge says that this study is along the line of what researchers have been saying for years: limit media exposure for children.

“There’s a lot of research about limiting the amount of media use,” he says. “Trying to keep it to a few hours a day and most importantly watching it with your kids and getting a sense for the storylines.”

There are many options for parents with younger children who want to allow their children exposure to media, like Arthur and other PBS programs, he adds. He says parents should focus on more than just the educational aspect of the programs, finding shows that promote social and emotional development.

U.S. News & World Report have released its rankings of the best children's hospitals and three Michigan pediatric hospitals have made the cut.
Read more
Advice