This empty nester transitioned from hating cooking to becoming a casserole queen. 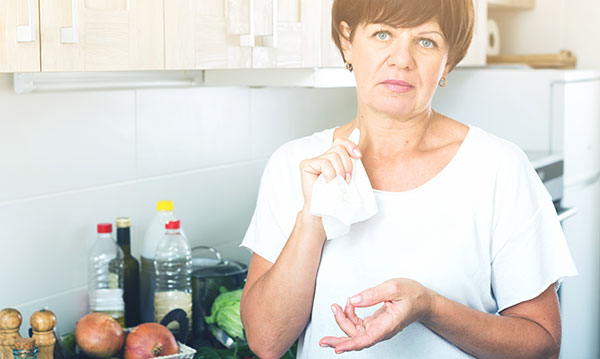 Now that I’m not working full time and our kids are grown, I’m trying to master the art of cooking. Because whipping up a meal may not be as difficult as I’d made it out to be, right?

My mother and I had different styles. So when I was asked to help out in the kitchen, it felt like I was being dragged to the furniture store. We weren’t tossing eggshells like confetti or sprinkling flour in the air like Julia Child wannabes. Mom was a clean-as-you-go sort, unable to move on to the next step until the previous one was completed. It made me crazy.

My culinary ambitions didn’t catch fire in college, either. After I moved out of the dorms, I made salads and generic chunky soup out of a can. Later, as a career gal in my first apartment, I ate Raisin Bran and cottage cheese for dinner. Why waste time cooking? There were so many other things to do – like read the latest issue of People or blow-dry my hair to perfection, a tradition of my mother’s I did follow.

After I married and became a mother, however, it was time to reckon with a lifetime of culinary disinterest – those kiddos needed to eat more than Raisin Bran.

And so my efforts to produce decent dinners were sincere. But my cooking vocabulary was limited. I was afraid to take chances. Following a recipe that had more than five ingredients was excruciating. And picking kids up from latchkey after a long commute didn’t exactly put me in the Zen mood you need to toss this and that into a bowl.

My husband didn’t cook. Instead, he cleaned the bathrooms – not a bad trade-off, if you ask me. But still, we ate. Simple things. Spaghetti. Hot dogs. Scrambled eggs. And I wasn’t averse to picking up $5 pizzas from Little Caesars on the way home from work. Occasionally, I attempted a fancier meal. But deliberate, conscious meal planning was hard.

A book I read as research for a story on women and ADHD, of all things, captured the feeling. “The everyday task of meal planning is second nature to many, but for a woman with ADHD, it can take on monumental proportions. She may as well be trying to win the Tour de France in a freak snowstorm with her shoelaces tied together – every day,” writes psychotherapist Terry Matlen in her book, The Queen of Distraction.

Or maybe it was just plain hard to cook, launder and clean while working and rearing the future of civilization.

Not that I’m providing excuses. Just trying to understand. And once you understand your challenges, limitations, whatever, it’s easier to overcome them. So, cooking, I’m staring you in the face, right now.

Going boldly where I’ve never gone before, I tweaked a tried-and-true recipe with ground sausage! Onions! Shredded Mexican cheese! Small potatoes for more seasoned cooks, I’m sure. I’ve made recipes with more than five ingredients – Hearty Chicken and Noodle Casserole, Beef Nacho Casserole, Quick and Easy Breakfast Casserole. (Apparently, I like casseroles.) Searching for recipes on Google using ingredients I have on hand is becoming a pastime. Cooking can be fun, even though it turns out I’m less Julia Child than I’d hoped, wiping the counters and cleaning as I go. Ah, I’ll loosen up yet.

Along with my husband, our two adult children – a recent college grad and a student who visits – are the beneficiaries of this recent preoccupation. I feel a need to prove something to myself. As a mother, I can cook, and, by extension, provide a little extra nurturing, sustenance, what-have-you, without feeling crabby.

For the record, I’m still working on the crabby part – but I’m feeling more Zen than I used to.