More parents choose to have their children share a bedroom, and it might be a good thing. Read more about the perks of kids sharing a room. 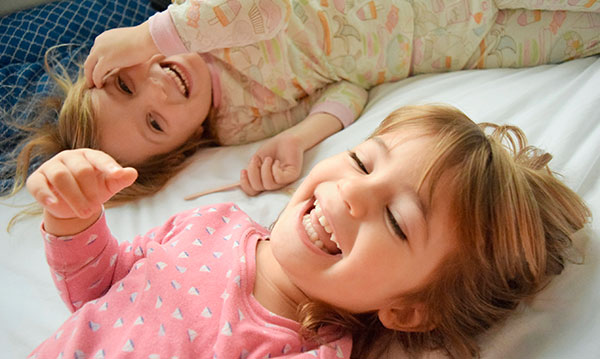 Remember how kids in ’90s TV sitcoms – like Roseanne and Full House – shared bedrooms? So many times, it seemed like a disaster, but in reality, that’s not always the case.

And, while the United States Census Bureau notes that the average size of the single family home is 2,467 square feet – which means there’s likely space for each child to have their own bedroom – many parents are opting to keep kids in the same room.

What’s up with the push for kids to share a bedroom? It actually has benefits – such as learning conflict resolution skills and finding ways to compromise.

Kathleen Schneider of Clinton Township is a mom of three boys, 2-year-old twins and a 5-month-old, and stepmom to a 14-year-old boy. She decided to have her twins share a room, even though she had space. Today, the new baby occupies the free room, but perhaps not for long.

“When he’s old enough, I’d like to move the baby into their room as well,” says Schneider.

The arrangement is convenient for bedtime and because the twins share everything else, Schneider says.

“It’s fun for them, and it’s comforting because they’re never alone,” says Schneider. “They play in their room a lot, even when they should be napping.”

Still, there are downsides.

Though they have never slept apart, and Schneider admits that sometimes it might be easier.

“If one isn’t tired, neither of them sleep,” says Schneider. “When they were in cribs, they would throw stuff into each other’s cribs to wake the other up.”

Though it’s difficult sometimes, like when they fight, Schneider feels they wouldn’t have it any other way.

“They have something special because they share a room,” says Schneider. “If they were in separate rooms, they wouldn’t know what to do.”

“When they were little, we would put them in the same crib and they would end up right next to each other, sometimes holding hands,” says Schmitt about her almost 3-year-old twins. She also has a 4-year-old.

Even now, sometimes they decide they want to sleep in the same bed together.

“They learn to share, and there’s a comfort that they’re not alone,” says Schmitt.

Schmitt knows that sometimes they keep each other up, especially when they’re not ready to settle down, but that they’re closer than they would be if they didn’t share a room.

“We’re considering putting the oldest in with them too,” says Schmitt. “We think he’s envious and wants to join them.”

Dr. Debra Hutton, director of counseling at the University of Michigan-Dearborn, agrees that sharing a room is beneficial for children.

“Siblings, at the end of the day, can process their day and they can talk things through,” says Hutton, a mom of two with a PhD in child pyschology. “They can learn to support each other.”

Hutton also agrees that children who share a room learn to share with each other and negotiate, which can translate to later in life when they go away to college and have a roommate.

Room sharing is not for all siblings, though.

“The closer in age they are, the more of a shared experience they have,” says Hutton. “Five years apart or more, they’re like only children because they don’t have the same experience.”

Usually, she says, children will want their own rooms around puberty, and at that time, siblings of the opposite sex should also be put in separate rooms.

Do your kids share a room? Do you see the benefits of it? Tell us in the comments section below.