Coming to Church: How One Mom is Finding her Faith 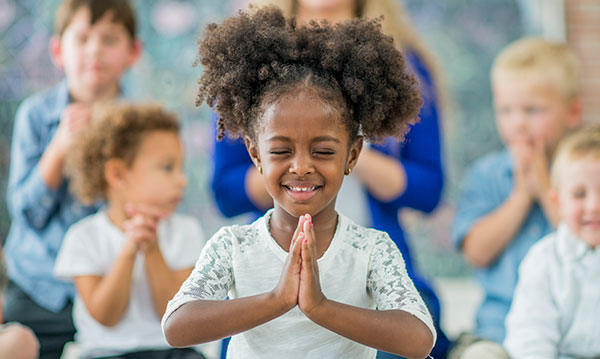 Growing up, my parents never took me to church. Not once.

My dad was cynical of all organized religion, in part due to his treatment at Catholic school. My mom shared one story about her Presbyterian roots – that someone from church came knocking at their door for money, and when her parents couldn’t pay, they were asked not to come back.

So I grew up a self-proclaimed atheist, finding spirituality through nature and yoga and exploring world religions from a curious yet cerebral distance.

Ironic, then, that I married a devout Christian with a born-again Baptist background. At first, I didn’t know what I was getting into.

Jeff didn’t talk much about his faith when we met, and he didn’t seem to go to church.

I didn’t know how deep his religious convictions ran until it came up in conversation for the first time – and quickly descended into a very tense talk as we realized our beliefs were polar opposite. It was almost a deal breaker.

But we kept talking.

We were married by his childhood friend, now a pastor at a local church, in a Christian ceremony after several weeks of Christian pre-marriage counseling. I became close with his parents, true evangelists who quote Bible verses in literally every conversation. We began attending church sporadically until we moved to Brighton after the birth of our second child.

Then, months turned into years without attending services, and I was just fine with that.

That’s when we discovered 2|42 Community Church.

From the minute we walked in, we realized it was a very unique place. The church took over a former racquet club, turning it into a community center open to the public every day, for free.

At its heart is a huge AstroTurf field where kids play ball and fly drones. It has an indoor playscape with a slide and a café that donates 10 percent of its profits to local charities.

The pastors, many with tattoo sleeves and beards, bring biblical stories into modern context with honesty and humor. One of the first times we went, an astrophysicist took the stage to talk about how science and religion coexist.

We have been members of 2|42 for a few years now. Our kids have grown from the preschool room to the middle school youth group.

The church has expanded to include a rock climbing wall, several large meeting rooms and a basketball court. I have been taking piano lessons at its School for the Arts for two years and walk the track in the winter for exercise. My son’s football team uses the field for practice.

And we go to services pretty much every Sunday.

I admit, I sometimes daydream my way through the messages and I’m still not comfortable singing worship songs.

But I am happy to be part of a church.

I like that my kids have a place to go that emphasizes values and morals and allows them to meet like-minded friends who are trying to do the right thing. I like to see that young moms have a place to gather and talk while their little ones run around nearby. I like to know the community is there to help people struggling with loss, addiction, loneliness or pain.

I like the charity work 2|42 does throughout the area and especially the way they encourage people like me to ask questions, feel welcome and explore.