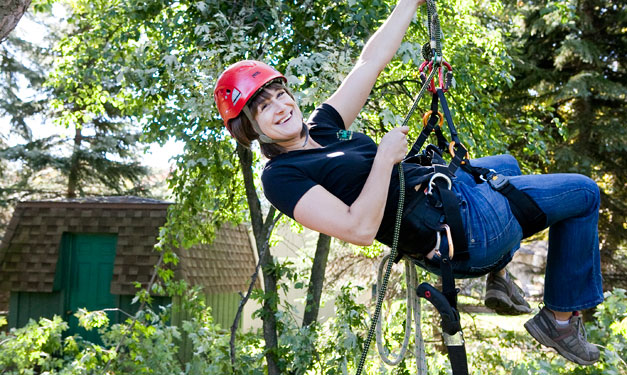 When Heidi Densmore of Sterling Heights returned to work after 12 weeks of maternity leave following the birth of her son Elliot, it was the hardest thing she had ever had to do.

“It ripped my heart out,” Densmore recalls. “It went against every grain in my body, like I was doing something wrong. I was so scared to have a complete stranger watch my baby.”

She didn’t want to return to work, but had no choice. Though that first day back was “really awful,” six years later, she realizes she is not meant to be a stay-at-home mom.

And busy she is – now, as the mom of two boys and as a full-time consulting arborist for Mike’s Tree Surgeons. She spends at least eight hours a day, five days a week diagnosing and treating the trees of customers who have invested significantly in landscaping. Typically done by 5 or 5:30 p.m., Densmore then picks up Elliot from latchkey and 3-year-old Owen from an in-home day care. By the time they all get home, they’re lucky to have two hours together before bedtime.

“After dinner, the kids want to play, and I want to get things cleaned up,” she says. “I try my best to remind myself that it’s not important that the dishes get done.”

During the busy season, which runs from spring through fall, Densmore and her husband, who also works for Mike’s Tree Surgeons, see their schedule get even more hectic. Densmore typically works at least five more hours a week. Thankfully, her workplace is flexible, and she is able to take a half-day off if one of her boys is sick. She can usually make that half-day up on the weekend.

Flexibility is especially important to Densmore given Owen’s chronic kidney disease. His regular hospital visits mean Densmore must tap into her vacation time for uses other than vacation.

1. Don’t sweat the small stuff.
2. Let the dishes and the other details go.
3. Try not to beat yourself up.

“Owen’s health introduced a whole other layer of guilt,” Densmore recalls. “I felt guilty leaving him when my maternity leave was over. I felt like I was the only one who knew how to properly administer his medications.”

Thankfully, the in-home day care provider Owen was with had been watching Elliot for some time and had become like family.

Mom’s workplace flexibility was also key when her boys were babies, because she exclusively breastfed both of them and wanted to do so for the entirety of their first year of life.

Densmore pumped three to four times a day in her office or in her car between customer appointments. She was grateful to have a private office, so she could close the door to pump at her leisure (she even crafted a handmade sign reading, “I’m busy milking … moo!”). The purchase of a hands-free bra helped, too, as it left her hands free to type, talk on the phone and continue working in the process. She used the office refrigerator to store her milk and kept a cooler in her car for storing milk expressed on the go.

This busy mama is exhausted more often that not at the day’s end. To keep herself fresh and focused despite the hectic schedule she keeps, Densmore takes a yoga class three times a week.

“It helps me a lot,” she says. “It allows me to escape to a quiet, peaceful place.”