Parents who work together on these tasks have higher quality relationships and better sex, a new study finds. 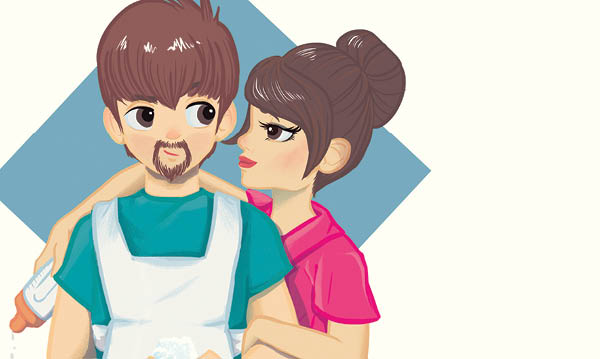 Couples that split child chores actually have better sex lives and higher quality relationships, a new study says. “Egalitarianism isn’t just good for women; it’s good for men, too,” says Dan Carlson, assistant professor of sociology at Georgia State University. Carlson, one of the study’s authors, says things can head south when the majority of these tasks fall to one person – especially when that’s mom.

“Your satisfaction with your arrangement is really driving everything,” he says.

So if mama’s not satisfied, daddy won’t be either.

It’s no surprise to Dr. Terri Orbuch. The local relationship expert, author of 5 Simple Steps to Take Your Marriage from Good to Great and professor at Oakland University in Rochester, has been following the same 373 couples for three decades and has witnessed all things marriage-related – including child care struggles.

“One of the high sources of conflict is the division of labor,” Orbuch says. “Women are all about this team approach, that ‘we’re in this together,’ so we think about relationships a little bit differently than men,” Orbuch says.

If couples aren’t on the same page, tension can arise – and when one person is doing the bulk of the work, sex takes a back seat. “You’ve only got 24 hours, and if you’re doing more, the less you can devote to anyone,” she says.

To get an idea of relationship satisfaction related to child care division, Carlson and his colleagues looked at data from 487 couples that filled out the Marital and Relationship Survey, a web-based, nationally-representative look at U.S. adults.

“It was a sample that was designed really to sort of look at couples for whom family policies would really matter,” Carlson says. “So it was couples who might have minor children in the home, couples where women were all under age 45; they were also largely low-to-moderate income families.”

Researchers divided these couples into three groups: female doing more, male doing more and splitting tasks equally. They then looked at relationship conflict, how happy the couples were and how much sex they were having. Couples who shared the responsibility did best, he notes. Men reported more conflict and more dissatisfaction when females did the bulk of the work. “A lot of this can be explained by satisfaction with the child care arrangement. The couples were not satisfied with how this was working out.”

“It’s a constant negotiation,” he says of sharing the duties. “You can sort of divvy that out in a way that it becomes equal.”

Orbuch, however, says splitting child care is difficult to measure. It’s ultimately down to, “Is it fair?” and “Are you participating in it?”

“It’s all about whether or not you meet my expectations,” Orbuch says.

It’s not easy, but finding a balance can improve your relationship – even when you’re busy taking care of kids. Orbuch offers three tips for making it work.

1. The 10-minute rule. Each day, take 10 minutes to connect, whether on the phone, via email or face-to-face. “Just practice or devote 10 minutes per day talking about something other than work, family/children, household and the relationship quality. Just talk about other things,” Orbuch says. Politics, sports and dream vacations are just a few conversation starters.

2. One act of affirmation, kindness or generosity per day. It could be something simple like turning on the coffee machine in the morning, giving your spouse a goodnight kiss or sending a sweet text. Whatever it is, do one daily.

3. Avoid the relationship rut. “This is at all stages,” Orbuch says, “but you can see this happening with new parents. Day after day, week after week of the same thing.” Add some kind of “newness” every other week or once per month. It can be a trip to the apple orchard as a family or taking a baby class together. “To remember that newness gets you out of the ruts. Newness also infuses excitement.”