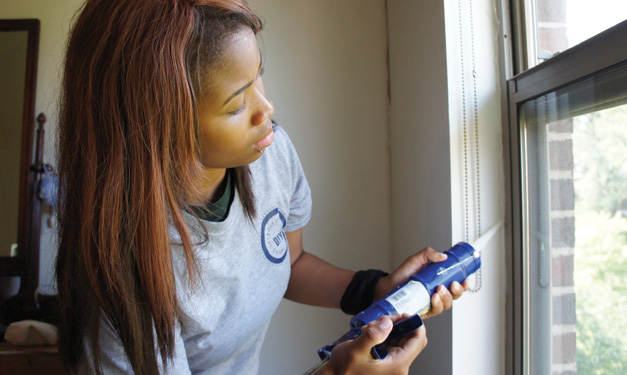 While school was out for the summer, a group of Detroit-area teens in the D-YES program were teaching others about saving energy and doing their homework on "going green."

The Detroit Youth Energy Squad – known around town as D-YES – is comprised of high school juniors and seniors from four schools in Detroit and Highland Park who spend the school year learning how to be energy efficient, says Cheryl Smith, a D-YES crew leader.

During the summer, the students, along with D-YES crew leaders and AmeriCorps leaders, teach area residents how to save money on their home energy bills, says Justin Schott, D-YES program director. The program mainly serves low-income households and senior citizens.

D-YES – a part of WARM Training Center, a nonprofit that encourages community sustainability – was formed in 2008 and has served approximately 1,800 low-income households thus far.

"We're very interested in helping people burdened by high energy bills learn some things they can do over time to keep bills manageable," Schott says of the program. In 2012, D-YES had 36 summer participants.

The students make home visits Monday through Thursday, caulking around windows, adding door sweeps and insulating basement piping, along with other small energy-saving fixes, says Chayla Greene, 17, a D-YES participant from the Detroit Institute of Technology at Cody high school.

Then, they go over the resident's energy bill with them to show them what they can save, says D-YES participant Willie Thomas, 16, from Detroit's Central High School.

Many of these small fixes can save residents a lot of money on their energy bills, explains 17-year-old D-YES member Mary Lindsey, also a student at the Detroit Institute of Technology at Cody.

"If they turn (the heat) down 1 degree, it will save them 3 percent on their bill," Lindsey says of winter energy bills.

According to its website, D-YES has helped save its customers about $250 a year in electric and gas bills, which has amounted to about $450,000 in energy bill savings citywide.

On Fridays, the teens did a community activity, such as painting boarded-up homes or learning at Greenfield Village in Dearborn and Lawrence Tech in Southfield, Smith says.

D-YES isn't just useful for the community, though, Smith adds.

"It gives the students a chance, first of all, to learn about energy and environmental issues, and it also gives them (an) opportunity to learn job skills," Smith says. "This may be some of the students' first jobs, and so it kind of teaches them how to have a job and how to perform."

Schott says the program is about saving energy, but also "youth development and empowerment," as D-YES teaches students communication skills.

The D-YES students receive a paycheck for their work through the summer, and the program rewards $1,100 scholarships for college if the students work a certain amount of hours, Smith notes.

As students exit the D-YES program, the hope is those students will "go on to be active in their communities" and "pursue meaningful careers," Schott says.

"After this, their mind is primed toward sustainability … (and) how to do things toward the future," Smith says: "Saving energy, first of all, and what are the renewable energies that are available that we can do."

D-YES will begin recruiting students for the program again this fall. Those who learn the skills throughout the school year will have a chance of being part of the paid summer program.

Thomas, who participated in D-YES for the first time this year, says other students should get involved because "if they want to do something positive and want to have a job," it's a "good opportunity." And "when opportunity comes to you, you can't just throw it away."