A first-of-its-kind study takes a close look at how your debt affects your children's socio-emotional well-being – some types worse than others. 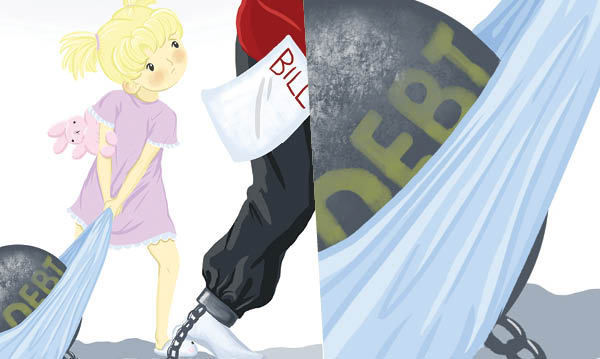 While these forms of debt are very different, they still impact the borrower’s life.

“There’s been a lot of work on debt and health,” says Jason Houle, an assistant sociology professor at Dartmouth College and co-author of a new debt study published in Pediatrics. “People borrow a lot of money and, if they can’t pay it back, they get stressed out.”

But how does debt impact the borrower’s kids?

Houle and lead researcher Lawrence Berger, director of the Institute for Research on Poverty and professor/doctoral program chair at the University of Wisconsin-Madison School of Social Work, recently brought debt’s affects on kids to the forefront with their new study.

To begin their research, Houle and Berger analyzed a major national study of kids dating back to 1979. They looked at data on 9,000 children ages 5-14 – and their moms – between 1986 and 2008, reported either yearly or every other year.

The researchers tracked these families over time as their debt increased or decreased. From here, they examined children’s behavior as their parents’ financial situations changed, which is known as a “within family” comparison. To get details about these children’s behavior, the team reviewed the Behavioral Problems Index, or BPI, which asked mothers to answer 28 questions about their child’s frequency and severity of behavior at ages 4 and older.

The findings? “Debt that allows for investment in homes (and perhaps access to better neighborhoods and schools) and parental education is associated with greater socio-emotional well-being for children, whereas unsecured debt is negatively associated with socio-emotional development,” the study notes, “which may reflect limited financial resources to invest in children and/or parental financial stress.”

Berger and Houle will soon dig into why this happens as they continue to study debt’s impact on children.

But one thing’s for sure, Houle says: “If the parents are borrowing, the parents have trouble making ends meet, we already know the kids are going to feel it.”

Getting out of debt is not easy, but it can be done. Not sure where to start? Laurie Marshall, MBA, CFP, a financial advisor at LJPR Financial Advisors in Troy, offers some tips for parents struggling to pay off their debt.

1. Stop using credit cards. Cut them up, hide them – do whatever you have to do to stop using your credit cards. “We once had a client put about 50 rubber bands around them, wet them, and toss them into the freezer,” Marshall says.

2. One at a time. List all your cards on a spreadsheet or piece of paper. Tackle the one with the lowest amount but highest interest first.

3. Make a snowball. “Take the money you were paying on the now-dead card and apply that to the next target,” Marshall says.

4. Small changes. Switch to basic cable, change your phone plan, cut coupons and more to slim expenses while paying down debt. “Keep track of the difference in cost after shopping for each item and use that to pay down your credit cards,” Marshall adds.

“Debt can endanger our children in a variety of ways, from stress on the parent, to parents being away from home to work a second or third job, to loss of dignity if a parent goes bankrupt, is sued or loses their home,” Marshall says.