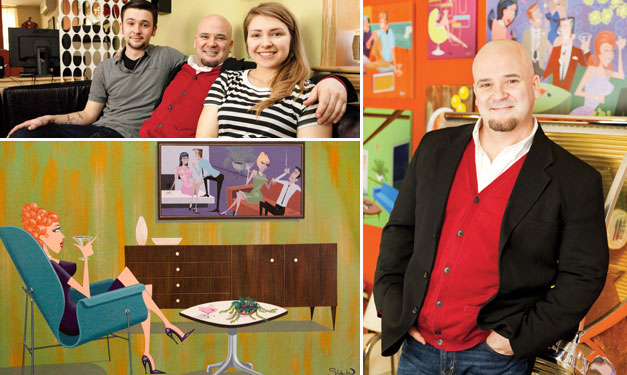 Peering at Detroit-based artist SLAW’s paintings is like stepping back in time.

Men in tuxedos with slicked-back hair smoke cigarettes, hold martinis and ogle ravishing women. Get close enough to SLAW’s colorful canvasses and you might even hear the faint sound of the Rat Pack crooning in the background.

“I’ve always admired the mid-century – the culture and lifestyle,” says SLAW, 47 – real name Kevin Stanislawski. “It was post World War II. There was this newfound wealth and opulence. There was attention paid to detail and design; form went before function. It was just a really cool time period.”

SLAW’s artistic style is a self-described cross between Hanna-Barbera cartoons and the modern look of the 1950s and ’60s. Think The Jetsons meets Mad Men, a comparison he gets often, despite the fact he began his artwork long before the hit AMC TV show aired. He always has appreciated ’50s and ’60s home furnishings, clothing, lifestyle and architecture. His Detroit basement apartment affirms this.

SLAW shares his home (and studio space) with his two kids – Kevin, 21, and Taylor, 18 – and their 3-year-old Yorkshire terrier, Frankenstein. The apartment celebrates all things retro: two working jukeboxes (a Wurlitzer and a Seeburg) that spin everything from Sinatra to KC and the Sunshine Band, ’50s and ’60s furniture and lamps, an old ’60s Pepsi Vendorlator vending machine, throwback tiki bar – and a mini time capsule of other items dating back to America’s golden age.

SLAW says his progression as a self-employed independent artist has been important for his kids to see.

His son, Kevin, studies art at Henry Ford Community College in Dearborn. In a couple semesters, he plans on attending Detroit’s College for Creative Studies (CCS), like his dad. Currently, Kevin is learning the fundamentals of art. It’s tedious, Kevin says, but it helps having a professional artist for a father.

“If I have any question at all, I can just ask him,” Kevin says. “He just answers it and I can get it right away.”

SLAW loves that he can help.

“He’s going through the struggles I went through,” SLAW says. “He didn’t have any real art classes in early schooling. I didn’t, either. A college class was the first real experience we both had.

“It’s fun, too, to answer the question where I didn’t realize I knew it. It’s like breathing.”

“Everyone thinks that you should be a parent, not a friend,” SLAW says. “But at this point, I feel I can do both.”

SLAW’s entrance into the art world didn’t happen at once.

After graduating in the mid-’80s from CCS, he joined the corporate workforce. He did some advertising work before taking a job with Ford Motor Co. as a design engineer. He realized it wasn’t for him and switched gears.

About 13 years ago, not long after he and his wife divorced, he started showcasing his work at the Johanson Charles Gallery in Detroit’s Eastern Market, followed by shows at the Scarab Club and other venues. SLAW also began to do cover art for a then-fledgling alternative publication called Real Detroit Weekly. From then on, he received more recognition.

“I’ll come up with ideas sometimes in the middle of the night,” he says. “I’ll do the research, come up with a sketch. I never work without a sketch idea.”

He paints with acrylic because it “has a whole different set of principles” and likes to use it to create a flat, even-toned image.

Even though his work can now fetch thousands of dollars, it’s not always a consistent paycheck. But that’s all right, because “an artist should always be hungry. It’s how we thrive and create great work,” he says.

In that regard, the Detroit art scene is alive and well.

“It’s interesting because if you go out to L.A., every waiter is an actor,” he says. “In Detroit, just about every waiter or waitress is an artist.”

SLAW has hosted about five shows at Wyandotte’s River’s Edge Gallery. In 2011, he was commissioned by the Wyandotte Street Art Fair committee to create a special rendition of the fair’s mascot, Art, for the event’s 50th anniversary.

His June/July 2013 show at River’s Edge features paintings of TV classics such as   The Brady Bunch  ,  The Addams Family,  I Dream of Jeannie and Gilligan’s Isla nd, among others.

“It’s my TV show show,” SLAW says. “In the generation I come from, we were raised with the TV. I grew up in its heyday.”

You can often peek at SLAW’s work at River’s Edge Gallery in Wyandotte (get the latest the River’s Edge Facebook page, too); check ahead to see what’s up. Friend SLAW Art on Facebook, to keep up on the latest (he does a variety of meet-and-greet around town) – and see what he’s got in store at the annual July Wyandotte Street Art.

Artist: Edward Hopper
’50s/’60s TV show: I Dream of Jeannie and Gilligan’s Island
Piece of art: The last one he did
Local restaurant: Union Street in Detroit
Food: pizza
Drink: martinis
Movie/TV show: The Great Escape
What he can’t live without: “Everything from money and a roof over my head to my family.”
Share
Facebook
Twitter
Pinterest
Email
Print